(All of these images are from WishbookWeb. It’s an impressive and outstanding archive)

I come from a Sears family. We already spent a lot of time at the mall during my childhood and my grandmother worked at Sears until I was well into my teens, so trips to the mall inevitably included a stop at Sears. It was the first place I played Nintendo (I had seen one played at my cousins’ house but I was a little kid so I wasn’t allowed to play) and it’s where I perfected my “burrow into the center of a circular rack of clothes and hide in there” technique.

You didn’t have to be a Sears family to appreciate the Sears Christmas Wish Book. The first Sears catalog was published in 1887, and for decades the Sears catalog was the only outlet available to non urban families for certain goods and appliances. This obviously wasn’t the case in the 1980s but the Sears Christmas Wish Book was still one of my favorite things about the run up to Christmas. Every year I would go through it from cover to cover, even the boring clothes pages. It’s where I got most of my Christmas present ideas. For today’s article I went cover to cover again with the 1986 incarnation of the Wish Book, and am going to share some of my findings.

I was a huge Browns fan as a child, and the mid-1980s was a time when it actually paid off to be a Browns fan. I of course wanted a Browns jersey. As you’ll see in this article, a lot of things seem like they should have been cheaper in 1986 than they were. This is one I actually expected to be a little more expensive.

This is definitely not something I ever asked for. I’m including it to illustrate that the Sears Holiday catalog had some serious variety. Who had $2,300 in 1986 to blow on a tanning bed?

We didn’t one either of these exact items; we did have a Snoopy Sno Cone dispenser. I don’t think we ever used it for its intended purpose. I can’t imagine using these either. It’s  a toy, so ostensibly it’ll be stored in the toy room. It’s going to be very sticky after one use and impossible to clean. $9.99 seems like a deal until you realize it’s $9.99 for a single use.

I’m pretty certain we had all four of these Fisher-Price playsets. I especially remember the first one because it looks like my parents’ house.

Teddy Ruxpin! Never had one. It was $65, too expensive. My cousins had one, and to be honest it’s not a great toy. Sure you can stick tapes in him and he talks, but that also means you own a stuffed bear with a hard mass in his back. 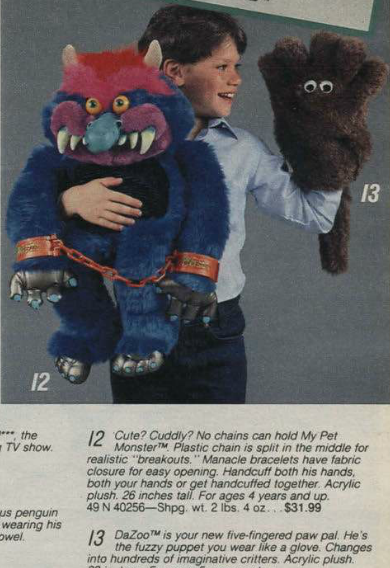 My Pet Monster! Never had one of these either. I definitely wanted one though. I’m not sure why I didn’t get a My Pet Monster, compared to ol’ Teddy up there My Pet Monster was a steal at $31.99. Same cousin as above definitely had one (Jimmy, in case my mom is reading this and wondering who). The breakable handcuffs were so cool.

Electric football has been around since 1929. That’s incredible staying power given that nobody has ever been able to complete a game. My dad had one and I believe there was one at each of my grandmothers’ houses. I have so many memories of getting excited about this thing for 5 minutes and then losing interest immediately upon trying it. The NBA Bas-ket game at the bottom left was cool though! Dad had that as well.

Remember what I said above about not using things for their intended purpose? I owned that Robotix set listed at #4 above. All I know is that I never once tried to do with it what it was designed to do. Christmas of 1986 I was six years old. Thank you to whichever aunt and uncle bought it for me but I was too young for this.

Nintendo! I played one of you at Sears. It would be a couple more Christmases before I got one of my own. Those game prices seem very low to me. I could be wrong, but I remember cartridges costing at least $50. Also odd that they weren’t advertising Super Mario Bros. in the ad.

My two favorite toy lines on one page. If you’ve spent time on this website in the past you’ve read about Wrestling Superstars and M.U.S.C.L.E. Men. I loved both of these toys so much and am slowly working on reacquiring them. $7.99 in 1986 is the equivalent of $18.75 today so I don’t feel so bad about buying King Kong Bundy over Thanksgiving for $15. 225 M.U.S.C.L.E. figures ($6.99!) would run several hundred dollars now on eBay. I know because I asked for them from my wife for Christmas. The WWF and M.U.S.C.L.E. rings were both great as well.

Barbie and the Rockers

I have two sisters so we had a house full of Barbie dolls. We did not have this cardboard studio but my sisters had a bunch of these particular dolls so I decided to include it. I was going to make a crack about paying $7.99 for a cardboard cutout but I just gushed over PVC and plastic wrestlers, so who am I to judge? Also it featured a plug in amplifier! 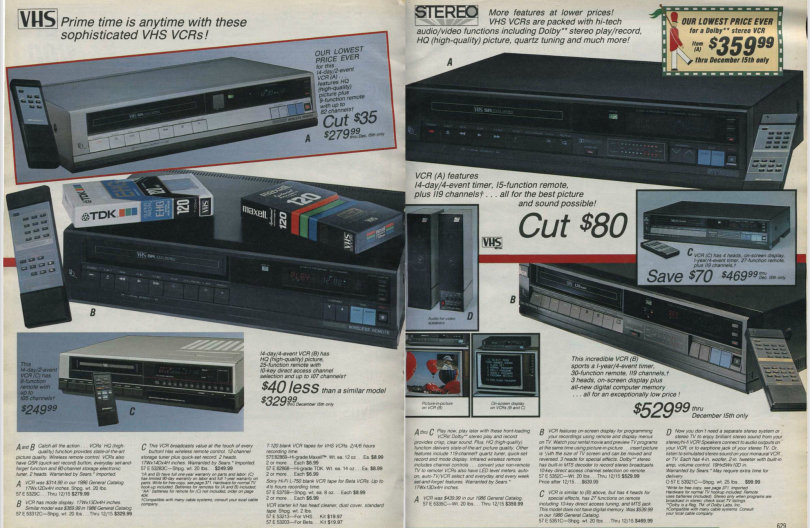 I’m getting to the end of this and I wanted to finish up by highlighting how costly electronics were in the mid-1980s. Whenever I look at vintage ads and commercials for things like phones, VCRS, and TVs I can’t wrap my head around how anybody could afford them. The average gross household income as of December 31, 1986, was $30,759. One of the low end VCRs above was ~$300. I can’t reconcile these numbers. Plus, my parents had one! In fact I think we had the $280 one in the top left. We probably got it from Sears.

An Insanely Heavy and Expensive Television

I wanted to include this for the same reason I included the VCRs, to point out that it cost $580 in 1986, but I also wanted to point out two other things. The first thing is that for $580 you were getting a 25″ television. The unit is massive, it’s 1/20 the price of a 1986 Chevrolet Celebrity (best selling car in 1986), and the screen is only 25″. But that’s okay, at least the damn thing still weighs 160 pounds. This television set weighed 15 pounds more than the Cleveland Browns starting punt and kick returner in 1986. This is one item that must’ve dropped in price pretty quickly because we had several of them in the house during childhood and I can’t imagine we paid $70 apiece for them. This was the first cassette player that my sisters or I owned. The first one was definitely owned by my older sister Sarah and this would’ve been around the time that she started getting into music. Whitney Houston’s debut album “Whitney” was released in 1987 and it’s the first tape I remember Sarah owning.

I hope you enjoyed the quick trip through the Sears 1986 Christmas Wish Book. I highly recommend checking out WishbookWeb for a wide assortment of Sears and other department store catalogs.

Did you scour holiday catalogs for present ideas as a kid? Let us know in the comments or on Twitter.