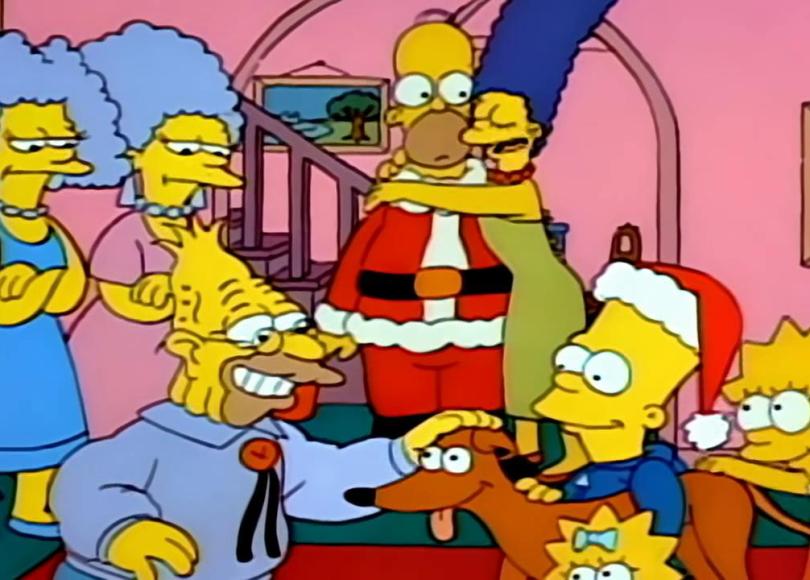 There’s a very common device most people employ when they’re writing an article about The Simpsons; I think I’ve seen it in every outlet from the AV Club to The New York Times, to this very article you’re reading right now (I haven’t used it yet, but I will!): The writer wants to let you, the reader, know that unlike your mom/aunt/friend/casual acquaintance who sent you a link to the article because “Oh, [your name] loves the Simpsons! And this is about The Simpsons. Ergo, [your name] will love this article (and by extension, me, their m/a/f/ca with whom they do not speak on a regular basis).”  The common device is this: casual use of a seemingly-specific Simpsons reference. Think about it – When was the last time you read an article about The Simpsons that didn’t include the word “cromulent” or “monorail” or, (if the author’s a real jackass) “d’oh!” It’s how the author lets you know that they, like you, are familiar with the show. As if it’s possible at this point not to be. It’s been airing since 1989. It’s still airing, I’m told. Like many fans, I consider the last two decades of material to be, at best, uninteresting (how strange it is to consider oneself a fan of a show while also actively deriding the vast majority of said show).  All this to say: As a fan of the show, I find it very patronizing when a writer throws in the word “embiggen” as if I’m supposed to suddenly stop reading to appreciate the fact that they’re a real fan of the show. I’m sure they are. I know I am. I’m such a fan that I’ve been asked to write about the first episode, “Simpsons Roasting on an Open Fire.” I look forward to someone I went to high school with sharing this article on Facebook and tagging me because they remember I had a Simpsons shirt in high school. 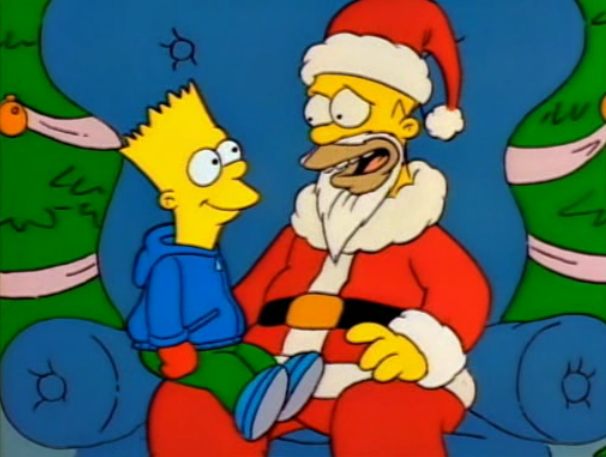 The episode is not really a pilot, since the characters were already established in the interstitials of the Tracy Ullman Show. It’s a Christmas special, so naturally it begins at a school Christmas pageant, a thing that I guess used to exist in the 80’s. Maybe they still do, I wouldn’t know. I don’t care for children. All the story beats of a Simpsons episode are there: Bart wants a tattoo for Christmas, Homer and Marge forbid it. Lisa wants a pony, but they can’t afford something so insanely expensive. Their Christmas shopping fund is a jar of change and loose bills. Homer’s counting on his Christmas bonus (please see this site’s analysis of Christmas Vacation to read about why the bonus system is ludicrous), Mr. Burns doesn’t give anyone bonuses because he’s evil. Marge has to spend the Christmas fund on laser tattoo removal because Bart went ahead and got a tattoo anyway like the freaking scamp he is. He cautions her against having a cow. Homer doesn’t want his family to know he didn’t get the bonus so he gets a second job as a mall Santa. He is exposed as such by Bart, whose scampary is inexhaustible. Homer and Bart proceed to the dog track and bet Homer’s meager Santa paycheck on a dog named, coincidentally Santa’s Little Helper. The dog loses. But in a shockingly heartwarming twist, the disgusted owner of Santa’s Little Helper just gives them the dog. Because this the world of dog racing and I guess it was that or shoot the dog? I don’t know. Dog racing gives me the creeps. They bring SLH home and he joins the family. Turns out that family is the greatest gift of all! Nobody mentions the fact that Bart has destroyed his sister’s belief in Santa Claus and is directly responsible for their financial predicament. Roll credits. 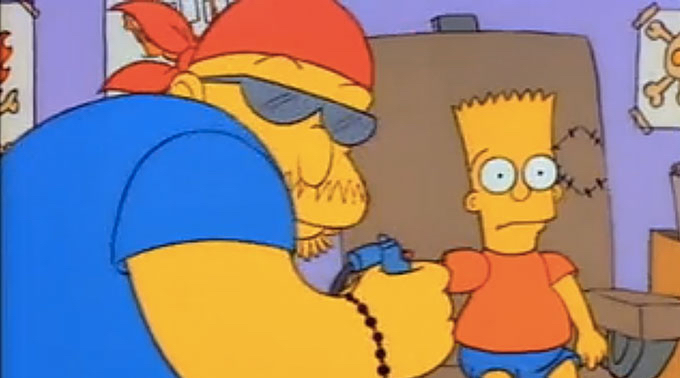 It’s generally considered to be a fine episode. It won two Emmys which is two more Emmys than I’ve won. I didn’t enjoy watching it, if I’m being totally honest. I mean, it’s… fine. I didn’t turn it off halfway through watching to re-think my life. I did start re-thinking my life after watching it, certainly. What choices have I made that led me to writing this? Should I have gone to law school? Should I have tried harder to have a personality instead of just watching this show non-stop in my formative years? What exactly is cocktail sauce? It looks like ketchup, it tastes like ketchup, but brother it ain’t ketchup! (Yep, this is where I decided to drop my casual reference! Please stop reading and appreciate that I am a fan of the show!)  Here is my point: I do not like this episode of The Simpsons.

Gasp! What a twist! Who could have seen this coming? Only the most astute of readers like you. “But Myles,” you may be asking yourself (if you’re less astute than those other jerks), “Why don’t you like this episode?” Well, shut up for a second (“oh wow another casually specific reference! This guy is a real fan!” – You, right now) and I’ll tell you. It’s the same reason I don’t like the episode that aired 15 years later in which they find jockeys living in a tree like weird elves (I’m pretty sure that was the last episode I watched live when it premiered). Because these aren’t the Simpsons as I know them. Bart isn’t a loveable rascal, he’s just an asshole spouting ready-for-tshirts-catchphrases. Homer isn’t the dimwitted but sweet patriarch, he’s just a jerk that lies to his family for literally no reason but his own pride. He’s also a bit of an asshole too, although not as much as Bart. Marge is devoid of any semblance of agency and walks around at all times with a giant jar of change hidden in her hair. She spends most of the episode taking the jar of money out of her hair, as if it is the funniest goddamn thing ever. Anyway, Lisa engages in gross cultural appropriation in the Christmas pageant and is otherwise unremarkable. Maggie, frankly, is fantastic in this episode.

Ultimately, I was left with more questions than answers. The main question: How much did laser tattoo removal cost in 1989? There’s no way you could afford it with a jar of change and singles. Right? Maybe I have grossly misremembered how much laser tattoo removal cost in 1989. I was two years old at the time, so my mom (like Marge!) forbade it. Fun side-story: she did offer to get me a tattoo of Bart Simpson when I was 14, but I was suspicious of the show’s decline in quality and didn’t trust that I wouldn’t regret it. Plus, I was 14 and should not be getting a tattoo. It’s tough having cool parents some times.

Let’s wrap this up. People at the time loved this episode. It blew their freaking minds. Why? I don’t know. Maybe people were more easily entertained. Maybe it was all the coke and Quaaludes and the looming recession. In any case, it was a hit. It was such a hit that they got a series order out of it. The ensuing seasons contain some of the greatest episodes of television ever written. Go watch those seasons. Hell, if you want to watch a fantastic Simpsons Christmas episode, watch “Marge Be Not Proud” (Season 7, episode 11). It’s a very good episode! And it premiered only 6 years after this not-good episode. Maybe on the 30th anniversary of “Marge Be Not Proud” in 2025, some nobody on the Internet will write an article about how they didn’t like it because the characters were different and the jokes weren’t funny to them. When they do, be sure to share that article with me.

As you can tell from the subtle yet specific references, Myles Hewette knows The Simpsons. He also know producing shows, like Infinite Sketch and Comedy Quarterly. Follow his shows at those links and catch Myles on Twitter and soon at Maude night at UCB Hell’s Kitchen.

If you’d like to rent “Simpsons Roasting on an Open Fire” you can access it via the link below. 80s Baby may receive a commission.