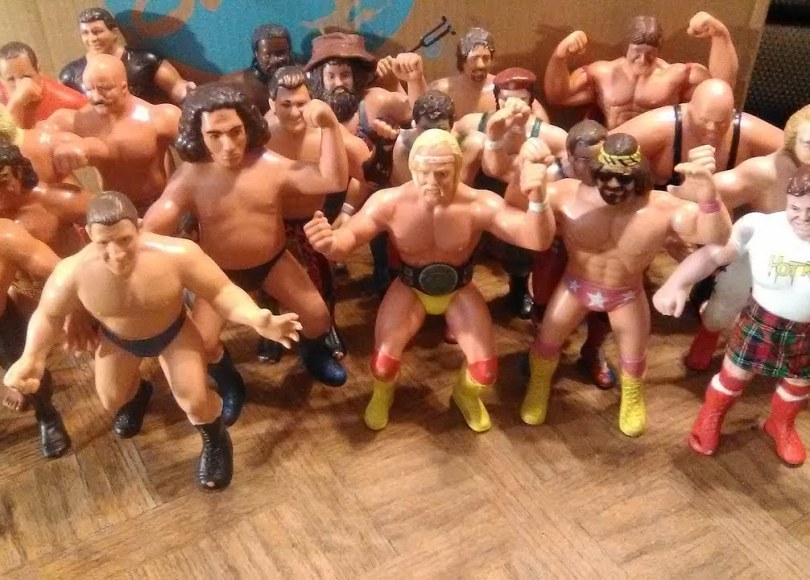 Children growing up in the 1980s had it pretty sweet. The Internet hadn’t been popularized yet, so all of their bullying took place in person, Ronald Reagan was more an abstract concept for a child than an inexplicably revered figurehead, and the toys were awesome. I had parents who didn’t believe in depriving us of anything (or a mom who prevailed upon a dad who still thought $10 was too much to spend on jeans), so I had some of the best toys. We’ll cover a lot of them in the coming weeks and months, but today I want to talk about my favorite toys, the granddaddy of them all. No, not the USS Flagg. Nope, not Voltron. Ugh. NO, NOT OPTIMUS PRIME. Of course I’m talking about the LJN WWF Wrestling Superstars.

Around 1984 the WWF was consolidating and expanding professional wrestling from a series of scattered regional promotions into a nationwide spectacle, engineered by Vincent J. McMahon and carried on the back of Terry Bollea, better known as Hulk Hogan. Across the country, young boys such as myself supplemented our Saturday morning cartoon watching with WWF Superstars. Of course, it wasn’t enough to watch the television show and practice the moves on our younger sisters when mom was at work, we needed to be able to recreate matches and set up new ones with our favorite superstars, which is where LJN entered the picture.

Beginning in 1984 and continuing through 1989, LJN produced 8 inch rubber figures of all of the prominent WWF superstars. I don’t think I necessarily had any expectations as to quality, but if I did, these toys exceeded them. Molded from rubber, the toys felt substantial, but they were pliable enough to manipulate the wrestlers’ arms and to a lesser degree their legs in ways that allowed you to approximate their in-ring moves. In addition, the likenesses were well done. The figures didn’t look generic: if you bought Macho Man Randy Savage, you weren’t getting a figure that you were going to mistake for Barry Horowitz or the Brooklyn Brawler. Macho Man was going to have the headband, the sunglasses, and the trunks.

With a dream of a Koko B Ware, Hulk Hogan, George the Animal Steele, Jesse the Body Ventura fatal four way in my heart and the wrestlers to pull it off in my arsenal, now all I needed was a ring. Luckily LJN came through in this regard as well, with a nearly perfect ring. The ropes had just enough tension to fling 8 inch rubber figures against one another, and also towards my  sisters playing Barbie across the room, if I got the itch to do so. A little bit of give in the plastic canvas would have been nice, but otherwise the ring was an ideal peripheral that brought the experience to life.

Between 1984-1989, LJN released a total of 73 singles wrestlers and seven tag team packs. Here are some of my favorites 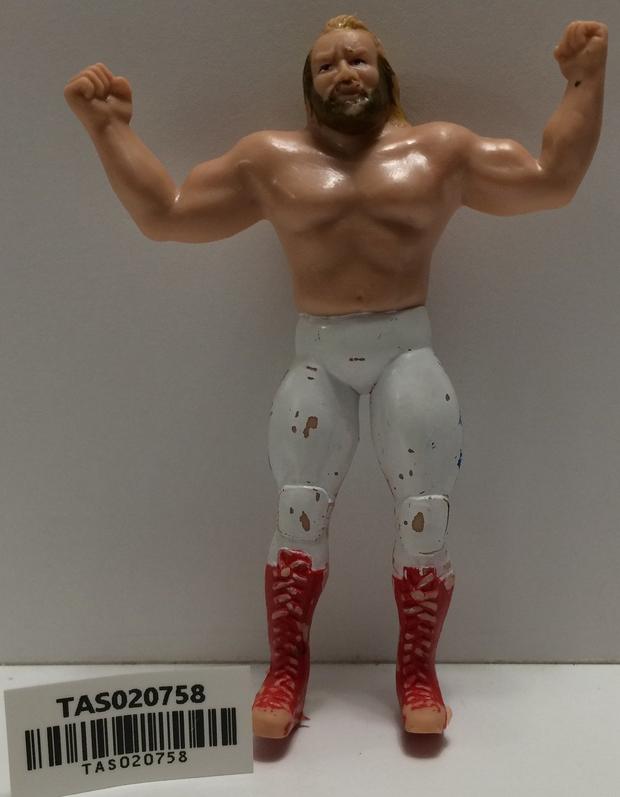 I inexplicably liked Big John Studd because…he was big? I guess? He was a fairly boring wrestler with a boring aesthetic, yet he was one of my favorites.

This one is fairly obvious. Jim was a big, goofy dude wearing overalls. What kid wouldn’t love him?

George ate the turnbuckles. He had a green tongue. He was very hairy. All of these are checks in the plus column for a six year old.

Thanks to the Internet 30 years later, I now know that Brutus was a mediocre wrestler who coasted on his association with Hogan, but at the time all I knew was he wore bright clothes and carried garden shears, so I was on board.

Captain Lou had a funny beard, his own face on his shirt, and he accessorized with rubber bands. All of these things were fascinating to a child. As a bonus, a few years later he played Mario on TV.

Did you have the LJN Superstars? What were some of your favorites? Let us know here, or on Twitter