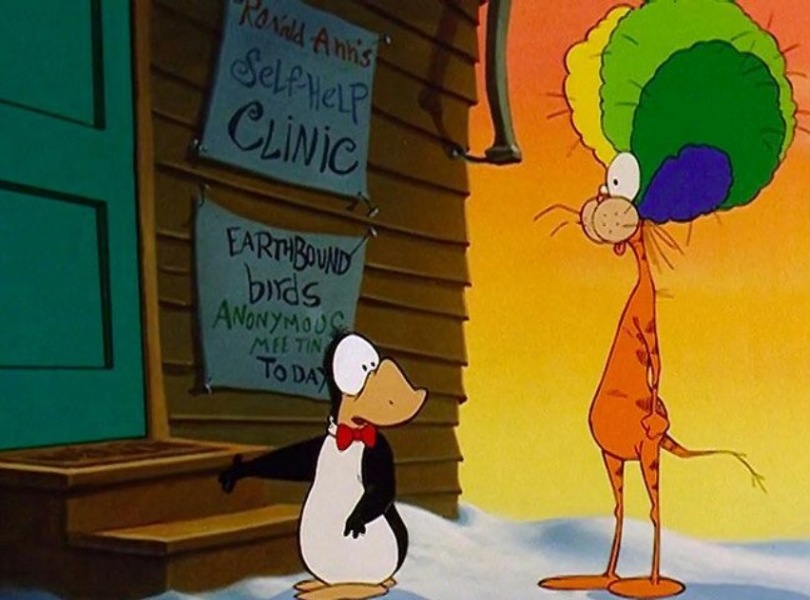 Okay, let me begin by addressing the title of this piece. I’m of the firm belief, perhaps the firmest possible, that a thing can be dumb and still be a thing that you love. I was born into a very well educated and self-serious family so being dumb and silly was the highest act of rebellion my sister and I could think of. One of the first ways this reared its head was stealing the funny pages every Sunday morning, and one of my favorites was, and still is, Bloom County.

For those unfamiliar, Bloom County is a really strange comic strip centered on a Penguin (Or puffin, honestly the species shifts around a lot but for the sake of this particular special he’s a penguin) who lives in a strange town full of eccentric talking animals, acerbic human adults, and precocious, if overly intelligent, children. The stories are often loosely plotted joke dispersion devices and the jokes themselves straddle a line between actual jokes and shoehorned cultural references. THAT’S WHAT I LIKED AS A KID! I often would gladly forgo actual understandings of jokes in exchange for the idea of knowing something was supposed to be funny. 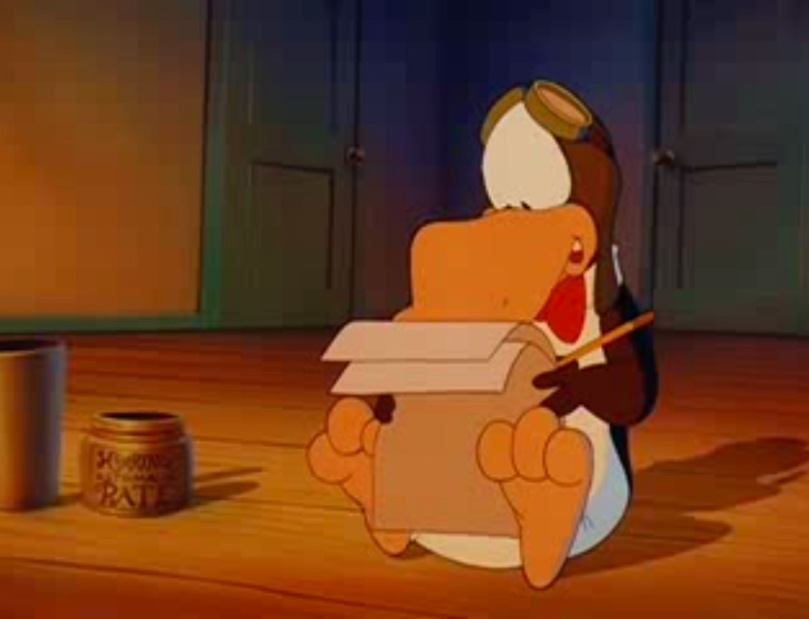 Okay I’ve couched my love for this ostensible garbage pile enough let us get to the plot shall we? Opus, the Penguin, has always wanted to fly, but as a penguin he’s unable to do so. He waddles around the town at times being set upon and other times observed by his best friend, Bill, the Cat, who has been lobotomized and had his brain replaced with cold tater tots. The majority of the exposition is provided as he writes a letter to Santa asking for the power of flight. From trying to use his own useless wings to building devices, every attempt has failed. He is mocked ceaselessly by his flighted brethren and attends self-help groups with other flightless birds (An insane chicken and a cuckolded kiwi). As he settled down for the night before Christmas, hopeful but doubtful, Santa Claus is flying above head and becomes unmoored from his reindeer. This leads to the local fowl coming and grabbing Opus. At first, he believes this to be a prank but soon enough he witnesses Santa himself stranded in the middle of a lake, and with it being winter and all, he is uniquely qualified as an animal that loves swimming in cold water to come to St. Nick’s rescue. Upon safely delivering Santa to dry, snowy land he learns that courage and selflessness are where his strengths lie and that everyone has their own contributions to make in order to make a community run smoothly. Also his new duck friends, formerly duck antagonists, decide to show their appreciation for Opus by carrying him along with them while they fly so he can finally experience his wish. And that’s it. That’s the whole thing. It runs 21 minutes without the credits.

I say all that to say this. I love this special, but not because it’s particularly good or prescient, although it has a strong message that resonated way more than you’d expect from the way I’m describing this thing. There are three things that I loved about this as a child, and still as an adult, and those are the absurd level of bouncing back and forth between jokes for children and adults, the art, and the message.

Absurdity and high brow/low brow balance has always been Berkley Breathed’s home court. Bloom County is, even to its most tenured readers, crazy. Its central characters are a bow-tie wearing penguin and a lobotomized cat with a musical tongue (this doesn’t come up in AWFWTW but in other appearances Bill The Cat has become the face of a hair metal band and is most well known for playing his tongue). It has cross dressing cockroaches, a pig who thinks it’s a rhino and so much more. All of this stuff plays in to this strange world that Breathed has created where everything seems to be unmoored. It plays to certain young people who kind of feel unstuck generationally; A bit young to really interact with the adults around them in a serious way but a bit too much of an old soul to really click with their peers. The idea that a comic strip could both contain relatively adult jokes like a kiwi comparing flying ability to sexual virility or broaching the idea of cross dressing at the same time as embracing extremely juvenile humor like the fact that Opus’ butt literally falls off when he’s surprised was a breath of fresh air for someone who felt at once at home in most social groups and alone in them at the same time.

Meanwhile the art is so evocative of a comic strip style that it boggles the mind at times. Beautiful wide shots and forced perspective really make it feel less like you’re watching a cartoon and more like you’re somehow watching live action inside of Breathed’s illustrated world. There is a particularly beautiful shot that is drawn from Opus’ point of view looking down his bed and out the window. The way the perspective meshes with the lighting and shadows is truly unlike anything I had seen at the time and continues to feel unique, even in this age of more advanced animation techniques. Character designs are unique and often times work to communicate quirks and idiosyncrasies of the characters in question without having to do so with spoken exposition or unnecessary plot devices. 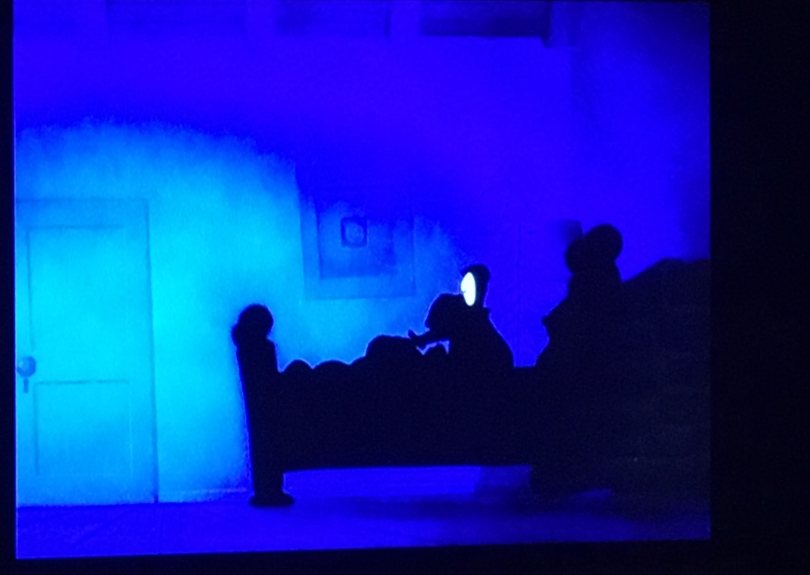 Finally, the show has a beautiful message. Whereas many feature length animated films struggle to get their point across in two hours, Opus only needs about 20 minutes to artfully communicate the need not to allow folks to define who you are. It touches on acceptance of others and selflessness as Opus at times opines on his shunning from his fellow birds while being welcoming and accepting of everyone around him, regardless of how much they may ruffle his feathers (Pun semi-intended). At the end we learn that the most important gift is being able to recognize your own worth and acting in accordance with your character. In the somewhat hurried final moments, the birds who have taunted Opus for his lack of flying ability end up needing him because their own fears of cold water are too strong, whereas Opus the put upon outcast leaps unflinchingly in to action (save for a second to decide whether to keep his bow tie on or not) to save the day, and by extension Christmas. It delivers an important message that steadfast moral code and belief in who you are will outweigh being one of the “cool kids” any day.

Overall, would I call A Wish For Wings That Work a masterpiece? No, not by a long shot. Would I say it’s worth watching? Absolutely. Whether you’re a comic strip enthusiast, someone who wants an uplifting holiday message or just want to see some dumb jokes about a cross dressing cockroach who uses tiny coconuts for falsies, this dumb thing has it all. Perhaps the fact I love it so much and can still call it stupid is the strongest reflection on its messaging. Life is not about being the best, or smartest, or most popular, but it’s about knowing what you love and who you are and not being afraid to share that with the world.

John Rosenberger is a stand up comedian based in New York City. He is the producer of the podcast Significant Others and an all around wonderful human. Follow him on Twitter.