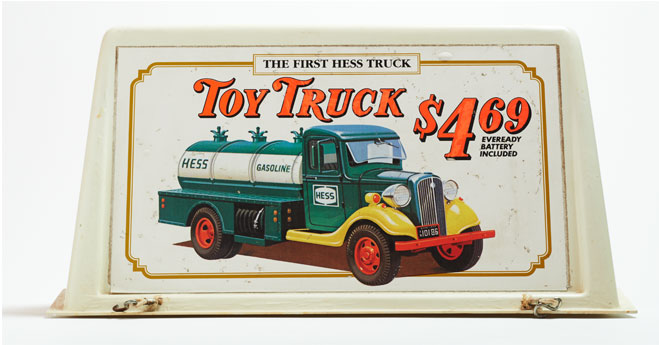 I was at the gym today (brag) when I saw a commercial for the 2019 Hess Truck.

“The tradition is here!” sings a multicultural youth choir at the end of a batshit ad that appeared to mimic Russian dash-cam footage. I was surprised to learn that not only is the Hess Truck still a thing, the Hess Truck now fucks! This isn’t your grandfather’s Hess Truck! Hell, this isn’t even MY Hess Truck!

I was born in 1980. Gross, I know. And as a youth growing up in that time it’s no surprise that 99% of my holiday memories, like most of my nostalgic memories, are tied to commercial properties. Especially properties made by companies that, in hindsight, wanted to murder you (Camel cigarettes, Budweiser, Dominos, etc.)  But none signaled that the holiday season was here more than ads for the Hess Truck. I never got a Hess Truck for Christmas. None of my friends did either. In fact, I don’t think I’ve ever seen a toy Hess Truck in real life? This is because, well, compared to He-Mans and Ninja Turtles and LJN WWF figures of the day – the Hess Truck kinda sucked. So I especially can’t fathom that, in 2019, when you can have Lawnmower Man VR-style sex using your Oculus Rift, some kid is going to put a fucking tow truck on the top of their wish list? I had to figure out what the deal with this truck is!

My online research into “what the deal with this truck is” took about two seconds. I imagined having to comb through old news articles and YouTube videos of 80’s commercials to put together a Hess Truck timeline. Turns out, the folks at Hess have a goddamn compendium hosted on its own site! This site is truly impressive in its scope to the point that it has spawned two hardcover books about the Hess Truck!

Not only can you search Hess Trucks by year and type (we’ll get to that), you also get obsessively detailed listings about each truck as if there’s a nefarious black market of bootleg Hess Trucks out there and they want to make sure little Johnny or Jenny are getting the REAL DEAL this holiday!

On a somewhat side-tangent, this got me wondering if there were online Hess Truck collector forums no doubt populated by users who go weeks without showers and are not legally allowed within 100 feet of elementary schools. The answer is: kinda? There seems to be a fairly active Facebook group boasting around 6000 members who appear to be your average adult toy collectors posting pictures of themselves playing with the trucks alongside their kids. That’s boring. There’s also Ray’s Hess Toy Trucks that sells Hess Trucks from all eras at rock bottom prices because, according to the stats on his site, some of these trucks had runs of a million or more units! For example, that 1987 Hess Truck bank up there has been sitting on Ebay for some time at $10 with zero bids. There’s more Hess Trucks in the world than there are Hess environmental violations!

So with no aftermarket value and not a whole lot of people salivating for the yearly truck drops, what exactly is the appeal of these toy trucks they keep pumping out into the world more aggressively than oil onto coastal Louisiana?

If you click on the Hesstory (yeesh!) stub of Hess’s official toy truck site, you learn that first truck was created in 1964 by founder Leon Hess to “offer families a fun, high quality and affordable toy for the holidays as a goodwill gesture to customers.” A more cynical person would think this was secretly a way for Hess to link their fossil fuel company to the holidays in the minds of children so that they would carry that nostalgia fueled association into adulthood when it was time to fill up their tanks but, hey asshole, Hess didn’t even widely advertise these trucks until the 80s! That’s sixteen years of money left on the table as most of the country couldn’t even buy:

The 1968 Hess Tanker Truck There were riots in the street! Vietnam was in full swing! MLK had just been assassinated! What better gift for your kid than a replica tanker truck that they could light on fire and pretend they were members of the SDS!?

The 1972 & 74 Hess Tanker Truck. There was a gas shortage in America so what better gift than a replica reminder of our country’s continuing dependence on foreign oil which could dry up at anytime! Buy two so mom and dad can strap them on their feet and roller skate to work!

But by the booming, Reagan 80s, Hess toy truck ads started hitting the airwaves hard! Set to the tune of “My Boyfriend’s Back”, every November a commercial would announce “The Hess truck’s here and it’s better than ever!” to a nation of kids who now looked at their previous year’s Hess truck with disdain. What a weird way to advertise your product knowing your jingle would say the current model you’re selling would be as appealing as a shit covered pizza in twelve months time? But I’m sure the owner of the NY Jets knew what he was doing.

The EXTREME!!!! 1990s and associated economic boom saw the annual Hess Truck double in size and come packaged alongside everything from a Hess helicopter, to a Hess branded motorcycle, to, in 1999, a goddamned Hess branded rocket ship obviously to commemorate the Titan 4A rocket, one of the most expensive space disasters in history.

By the end of the 1990s I was no longer a child and thus far more interested in destroying my liver with alcohol due to now having to work for a living than I was in the Hess Truck. However, it’s interesting to note some variations on the annual truck between then and now including:

The 2004 Hess SUV. Sure gas was like $4 a gallon again thanks to the erroneous “war on terror” and jeeps were all the rage overseas in terms of vehicles that could be fashioned into bombs, but this Hess one came with two adorable motorcyclists who could safely zoom away the second they smelled smoke.

The 2007 Hess Monster Truck with Motorcycles. Yes the US was in the grips of its worst recession in decades but, fuck you, our Hess monster truck has flames on it!! Who needs a retirement plan when you can pop dank woolies on your big ass bike!? The Hess Monster Truck had tires large enough to crush any car or your child’s hope of not drowning in student loan debt.

The 2018 Hess RV with ATV and Motorbike. Ok, boomer, you made it! You got to spend your working years during some of the most economic advantageous decades and retire with a house paid off, little to no debt, and a nice chunk of change in your 401k. Pat yourself on the shoulder, you maverick! Unlike these millennial “snowflakes” of today who whine about avocado toast and what gender they are and how their life expectancy has been dramatically reduced, you can appreciate the finer things in life like cruisin’ this nation’s crumbling highways in your own goddamned bus! Why help your children pay off their college debt or buy into the housing market when you can buy an RV big enough shove both a motorcycle AND an ATV into!! The government can’t continue to tax you if they can’t find you! Take off into the sunset, you little Jack Kerouac, and live the American dream! And don’t forget all that sweet, sweet Hess gasoline you’ll need to literally fuel that dream (now trading at $66 a share!)

Shit. So the appeal of the Hess Truck is just more boomer nostalgia, huh? That’s who these trucks are aimed at-not kids but their parents. In fact, since their merger with Speedway in 2015, there’s basically no Hess stations anymore. Kids these days can’t even make the connection between the holidays and a soulless oil profiteer like we could back in the 80’s. Yet, like clockwork, every holiday season brings a new Hess truck. People my age and older have been nostalgic for the nostalgia of the Hess Truck more than Hess the gas company for some time. And Hess knows this. These wastes of plastic are the last vestiges of the fifty-odd year legacy of Leon Hess. And that’s why I still want one. No, not to support a dead millionaire- fuck him-but because of the Hess Truck’s iconic place in the twentieth century. I know we can’t keep every last bit of nostalgia from our youth alive but the fact that some petroleum company decided to make toy trucks out of its brand and then kept making them every winter in the face of clear public indifference, regardless of what else was happening in the country, for over half a century until they became as linked to the holidays as candy canes and suicides are – is something I don’t think I want to go away.

We’re definitely living in a more sensitive and aware time which is great, but considering we’ve killed Joe Camel, Spuds McKenzie, and whatever the Coors Light Beer Wolf was – let’s let the Hess truck live as the last and arguably least offensive exemplar of a time when we’d pay horrible companies for the privilege of advertising to our children. Only, with the Hess Truck, we’ve also put it right up there with Santa and the menorah! The balls on that company! Let’s let the Hess Truck continue to exist so that one day some future space child will pick up the 2096 Hess truck / orb and say “you bought toys from the company you also gave a lot of your paycheck to so you could get to work to continue to make money to buy more toys and gas instead of burning them all down and dragging their bodies broken and bloody through the streets!? Man, you guys were weird!”

So put an oil can in your manger display this season. Like the song says, ”the tradition is here.”

Oliver Lyons has thought too much about the Hess truck. “At” him at @JokesforJohnnyB

If you’re ordering presents for the holidays save money on shipping by signing up for Amazon Prime at the link below. 80s Baby may receive a commission.