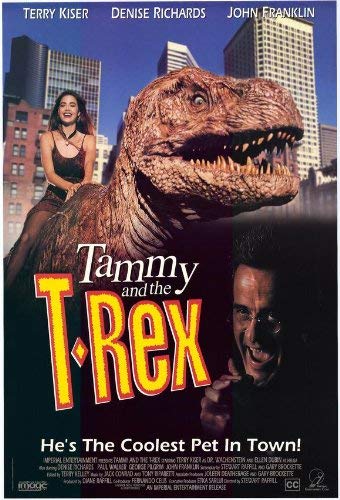 (I co-hosted a podcast called 1994 and oddly enough Tammy and the T-Rex never came up. Longtime supporter and friend Causey loves this movie and brought it to my attention, although I’ve yet to see it- Ed.)

“Is that really you in there? Oh Michael, what have they done to you?”

Oh, 1994, a much more innocent time for all of us. Friends and Seinfeld ruled the airwaves, and a little band named Candlebox was lighting up the charts. We all love Candlebox here, right? Anyway, in this wonderful year, director Stewart Raffill was approached by a man who owned theaters in South America who owned an animatronic T-Rex that he was about to ship to Texas. This man really wanted the T-Rex to be in a movie. They didn’t have anything in the way of a story, but they did have to start filming within a month if they were going to use it. The end result is a bizarre horror comedy about a young man, his girlfriend, a mad scientist, and the T-Rex. This is the story of Tammy and the T-Rex.

Let’s get this out of the way: this movie isn’t “good” per se, but it’s a hell of a lot of fun. The plot is bonkers. Basically, Michael (Paul Walker, RIP) is a young man whose defining characteristic is that he is dating Tammy (Denise Richards, billed as Tanny in the opening credits for some reason). Her ex-boyfriend Billy is really mad about this relationship and they fight a couple of times right off the bat. Michael goes to Tammy’s house to “bump uglies” (I’m pretty sure that’s the 1994 slang version of “smash”) and Billy loses his mind. They chase Michael into the woods where he is mauled by a lion, because why not? Anyway, Michael is severely maimed and his body is stolen from the hospital by a mad scientist (Terry Kiser a.k.a. Bernie from Weekend at Bernie’s 2… and regular Weekend at Bernie’s) who decides to put Michael’s brain in the animatronic T-Rex he has lying around. Michael the T-Rex escapes from the lab and kills a lot of people, with extremely corny gory results.

You’re not gonna believe this, but this movie is not without its flaws! It’s fairly problematic by today’s standards. Tammy’s best friend Byron is gay and if I had to guess, the screenwriters had never met an actual gay person, so guess who hits every single stereotype? Also, they only had a week to write the script, so most of the dialogue is barely functional and it’s unclear what anyone’s plan is half the time, and the other half of the time they spell it out completely. The lion is not a flaw though. We’ve all been to the woods in Los Angeles. They’re overrun with lions. Lions are a public menace, and it’s good that this movie uses its platform to point that out. 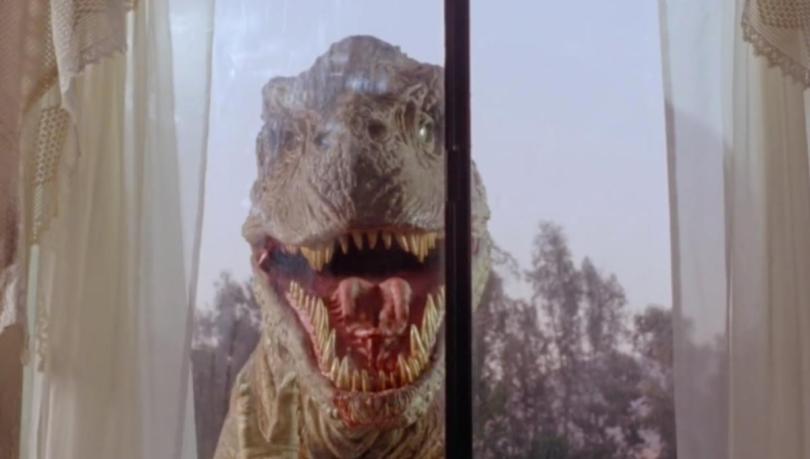 As far as the production goes, well, they had a week to write the script, like I said. I’m not sure how they did casting, but it’s pretty exciting that they got two actual future stars to star in this bizarre, bizarre movie. This is far from either of their best work (it’s no Furious 7 or Drop Dead Gorgeous), but they’re about as good as they need to be here. All of the locations are within 25 miles of the director’s house, which is convenient for him. Also, and this is the wildest part to me, the film was shot with a lot of ridiculous gore, but the distributor decided they could make more money by editing it down to a light PG-13 so they could get that money from the family market. I’ve only seen the gore cut, and I have no idea how or what they even did to achieve that. On one hand, it’s not like the movie could become more incoherent, but on the other, the over the top and cheap gore is a big part of the charm.

Should I Show This To My Five-Year-Old?

I’m not gonna stop ya. There aren’t a lot of teaching moments here, but I guess you could do something with teaching your children about the dangers of going into the California woods. You can teach them about lion safety. Maybe there’s even a lesson about not letting just any old mad scientist declare your boyfriend dead before he’s actually gone and then stealing his body. I don’t know. Get creative. You know what kind of lessons your child needs, not me. I’m not trying to parent for you. I can barely parent my five plants. They’re all on drugs. The five plants are. Two of them spend an inordinate amount of time at the video arcade. I’m a bad parent.

This movie is far from good, but it is a lot of fun. The effects are charming in how cheap they look, and it is fun watching a couple of stars before they were big (or even good) try to work their way through this material. This movie doesn’t take itself too seriously, and you shouldn’t either. Not everything has to be Doctor Zhivago. We can all relax every once in a while and watch something weird, and for that reason, thank God we have Tammy and the T-Rex. It’s on Shudder right now, so check it out. What do you have to lose?

If you don’t subscribe to Shudder you can always pick up the newly released Blu-Ray of the Gore Cut of Tammy and the T-Rex. 80s Baby may receive a commission.