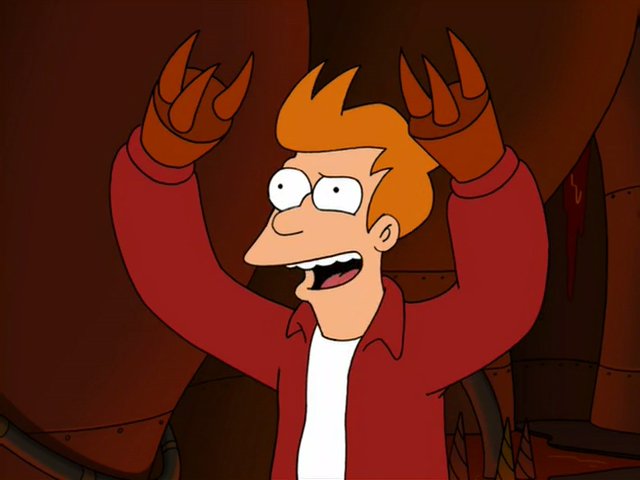 I’ve been really lucky to have been given the chance to write about some of my favorite things for this website.  But this one, woo boy, this one I feel a lot of pressure to get it just right.  I didn’t really know how to structure this.  Maybe my favorite episodes?  I did that for Are You Afraid of the Dark? but it didn’t feel satisfying (though, “Godferd Gildy” remains one of the funniest things my sister has ever said).  So, let’s keep it simple: On this day, 20 years ago, Philip J. Fry was cryogenically frozen and awakened 1000 years in the future. 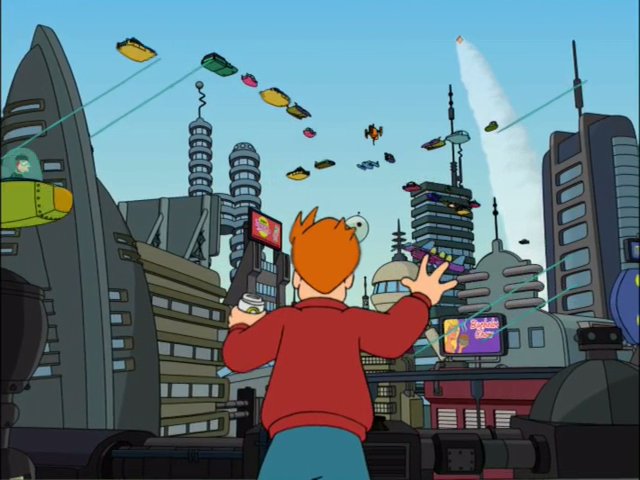 On March 28, 1999, a little space show by the guy who created The Simpsons premiered on Fox.  It struggled to find an audience and was cancelled after four years on the air.  But because nothing ever really dies on TV any more, it was brought back for four movies and two more seasons.  One of the most impressive things about Futurama (aside from The Futurama Theorem) is just how fully formed the show is right out of the gate.  The head jars?  Pilot.  Alcohol powers Bender’s fuel cells?  Pilot.  “Bite my shiny metal ass”?  Yup, pilot.  Heck they even introduce Nixon as an antagonist before the episode is over. 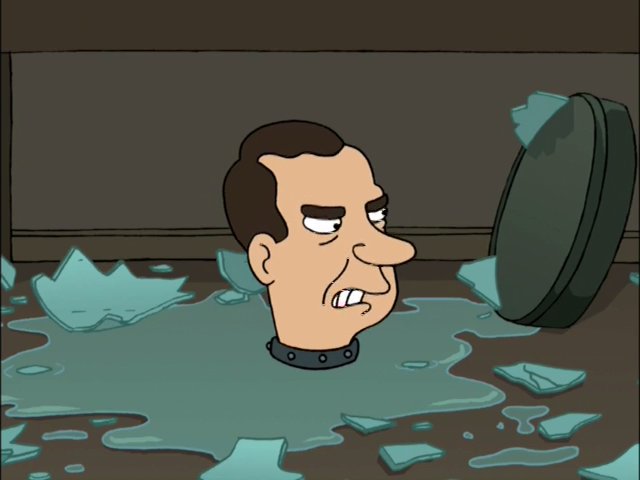 Futurama is my all time favorite show.  It’s left an indelible mark on myself and my marriage (Hi, John!) because I need white noise when I fall asleep so it makes sense to put on something I’ve seen a thousand times and won’t get distracted.  Whenever I’m feeling glum, JB will just turn on an episode of Futurama for me and let me pout.  I quote Futurama the way my peers quote The Simpsons.  In rewatching the pilot for this article I realized (after god knows how many viewings) that I say “fired… out of a cannon into the sun” because of Leela (not our cat).  Also our cat’s name is Leela because Futurama is my all time favorite show.

TV and movies tend to not make me cry.  Yeah, Coco made me weep for 2 hours straight but I’m not a robot, jeez.  Futurama, though, kicks me right in the heart sometimes.  There’s “Jurassic Bark” which is widely considered one of the saddest half hours of television and I know it all gets retconned and Seymour actually gets to live a long and wonderful life with Lars but it is still SAD AS HELL.

Fry and Leela’s romance was a powerful throughline for the show and they received conclusions worthy of their story.  When Fry plays the Holophoner on his own for Leela and their little cartoon selves walk hand in hand toward the horizon?  Leela confessing her love for Fry as they fly Into The Wild Green Yonder??  Fry and Leela agreeing to erase their entire lives together so they can go back and do it all over again???  My cold black heart can’t take it.

But for my money, the most emotional sequence in the entire show is the closing scene of “Leela’s Homeworld”:

Leela spends the entire series searching for her place in the universe.  She was left at the Orphanarium in a basket with a note in an indecipherable alien language.  She was clearly not human, with only one eye, but she could not locate any others in the galaxy who looked like she did.  Except for that one time but that turned out to be a space cricket.  Turns out she needed to look in the ruins of Old New York.  Leela is revealed to be a mutant with such a mild mutation her parents sent her to the surface to give her a chance at a good life, free from the stigma of being a Sewer Mutant.  And, turns out, her parents didn’t abandon her in full.  They were always there for her in their own ways.

Futurama has an absurdly talented voice actor lineup and one of my dumb internet obsessions is looking up what other cartoons people have worked on.  The cast has voiced other iconic characters such as Jake the Dog, The Brain, and Kevin’s mom, Linda Tran, on Supernatural. Billy West does more than two dozen voices on the show, including Fry, The Professor, and Zoidberg.  I am fairly certain Katey Sagal is the only regular cast member on the show who doesn’t do more than one voice.  I am also fully surprised Jess Harnell has never worked on this show.  You’d think Wakko Warner would have been needed at some point.

There hasn’t been a new episode of Futurama since 2012 and, honestly, it’s kind of nice.  Shows tend to overstay their welcome now or really do not hold up against the test of time.  I think the handful of new episodes worked to expand on the story and give a final resolution to Fry and Leela but didn’t undo the charm of the original seasons.  And the show never really punched down so it’s jokes aren’t “a product of their time”.  There are some dated references, for sure, but nothing that would necessitate a weirdly Tweeted apology from Matt Groening.

At the end of it all, Futurama is a show about belonging and found families.  Fry wakes up to find his entire family, all of his friends (or lack thereof), are dead and he has to start over.  Where he struggled to find his place in the world in 1999, the year 3000 is so much easier for him to navigate.  And while the show is set among aliens and robots, it feels so human because of the struggles of its characters.  To find love, to find family, to find acceptance for who they are.  Now I’m just a simple country hyper-chicken but I think this is why the show resonates with its audience.  Everyone spends at least part of their lives looking for where they belong. Sometimes it’s as a delivery boy for an intergalactic shipping company with a robot best friend and a crush on a cyclops.

Amy Bilancini lives in Brooklyn with a neurotic cat, a fat dummy cat, and a husband who wants to move to Chicago. Follow her and the cats on Twitter and Instagram.

You can own the complete Futurama by clicking through below. 80s Baby may receive a commission.