Submitted for the approval of The Midnight Society

A lot of people can point to their first exposure to Stephen King as the beginning of their horror fandom.  When I was 11, my mom handed me Needful Things because it was the biggest book we owned and I was a voracious reader.  But by then I was already knee-deep in more child friendly spooky media. The Goosebumps series started in 1992, when I was 7-years-old, and shortly after Welcome to Dead House hit the shelves of my local library Are You Afraid of the Dark? premiered on Nickelodeon*.

Are You Afraid of the Dark? felt like Mature Television to me.  It aired at 9:30pm, closing out the SNICK block, way after my normal bedtime.  There were never any adults coming to save the day and the kids at the center of the stories were often in real danger… well, real spooky danger at least.  Because it is a kids show, the stories were tied up neatly at the end of the half hour and our protagonists often learned a valuable life lesson but it was never saccharine, never pandering.  The Midnight Society was acceptably rebellious, sneaking out at night to tell ghost stories around the campfire is a pretty wholesome thing to do. There were no “Very Special Episodes” because that wasn’t the point – it was a spooky show for spooky kids and everyone knows the spooky kids weren’t the ones getting up to pre-teen shenanigans.

Are You Afraid of the Dark? remains, to this day, one of me and my sister’s (Hey Shano!!) favorite shows.  We even tracked down a bootleg DVD copy of the entire series (with all of Salute Your Shorts as a bonus!) on eBay when I was in college.  I still have the unmarked, black slim-line amarays and relied on them heavily over the last couple of days.

While writing this article, I reached out to my sister (Hey again Shano!) to ask what her favorite episodes from the series were.  Her choices were interesting, especially since one wasn’t an episode, but were respectable picks:

“THE ONE WITH GODFERD GILLDY OR WHATEVER HIS NAME IS”

Ok, after I stopped laughing at GODFERD GILLDY it became clear she was referring to “The Tale of Station 109.1.” It’s about a very spooky kid for whom things get a little too spooky when he listens to a radio station for ghosts that’s managed by Gilbert Gottfried.  He has to hijack his brother Ryan Gosling’s favorite radio show to get rescued. It is absurd and is basically Coco without the singing. 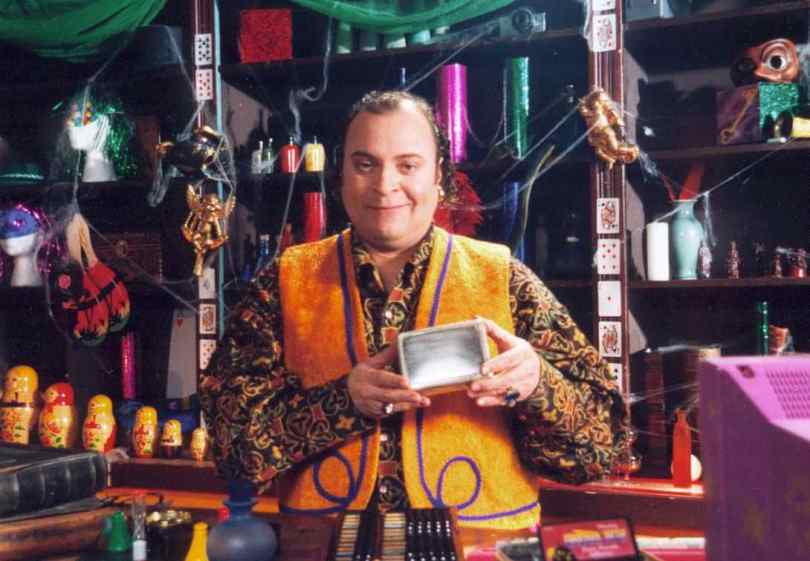 “Also the magician one”

There is an episode about a magician called “The Tale of the Magician’s Assistant” but this is not what Shano meant.  She was talking about Sardo (no “mister”, accent on the DOH). Sardo owns Sardo’s Magic Mansion and is a recurring character in the series.  He’s Gary’s (the cute nerd and older brother of Tucker) creation and essentially his favorite NPC. Sardo is at the center of a lot of magical mysteries and peddles many gently cursed items.  He sells the glasses that are the Macguffin for the They Live! episode, “The Tale of the Super Specs” and the potion in “The Tale of the Dark Dragon.” Sardo does seem to have some magic skill himself but generally he’s a bumbling snake oil salesman who is often shocked to find that his items actually do work and aren’t expensive bits of plastic.  However, have you seen the vomit? 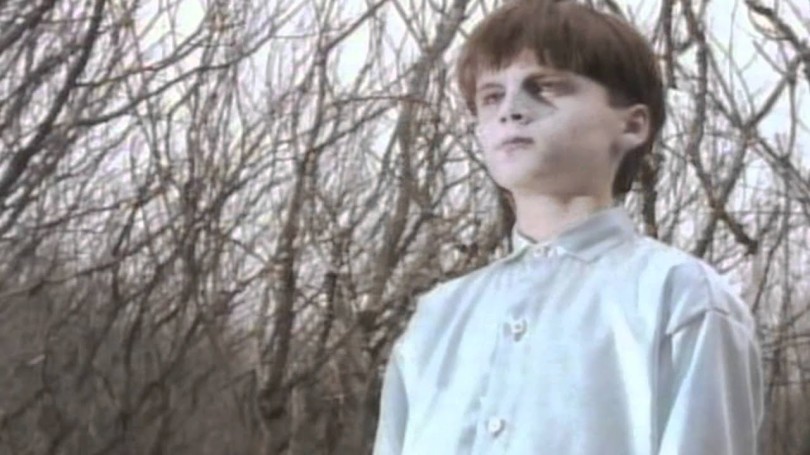 “The Tale of the Frozen Ghost” is one of the most iconic episodes of Are You Afraid of the Dark.  The plot of the episode really has little to do with the frozen ghost who gets to moan “I’m Cold” that I definitely do not mimic at least once every winter.  The episode has a bratty teen, eccentric aunts and hidden gold which makes it just a good story on its own, throw in a chilly ghost and you have a classic episode of spooky kid TV.

Now, I know you’re all dying to know my top episodes so here we go: 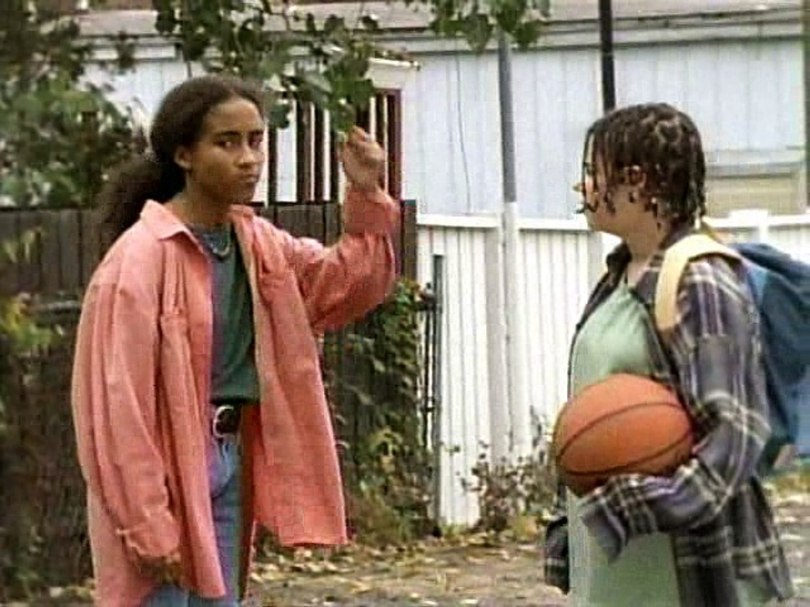 My episode descriptions are not as jazzy as my sister’s (SHANO!  HI!) but they get the point across. This is my all time FAVORITE episode.  “The Tale of the Closet Keepers” is, as you may have guessed, about a zoo full of children on display for various aliens.  The kids are kept in line via a sonic weapon so it’s up to Stacey, a deaf girl, to save the day. They live in approximations of bedrooms – everything is two-dimensional for the most part – and are fed green jello while aliens in gas masks applaud their freaking out.  It’s The Great Escape meets The X-Files but for kids! 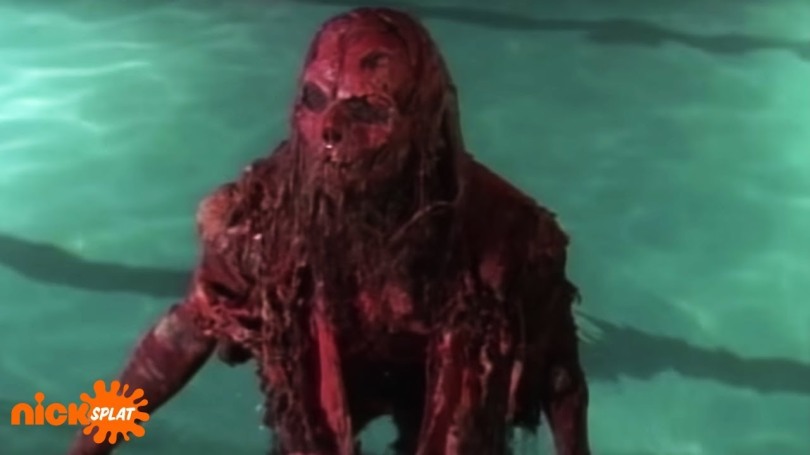 “Slime Monster in the Pool”

After opening with some light teen smooching and the untimely death of a child, “The Tale of Dead Man’s Float” settles into the story.  This is probably the most terrifying episode of Are You Afraid of the Dark?, even as an adult. There is an unseen malevolence living in a pool and its sole purpose is to terrify and murder anyone who wants to go for a swim.  And when the kids figure out how to make the entity visible, well, it’s a great bit of practical effects.

Are You Afraid of the Dark? has been scaring kids for almost 30 years and just got a fresh reboot this fall.  The look of the episodes is dated but the stories are timeless. Go back and watch your favorites! They might be a little cheesy now but they’re still a lot of fun.

Want to catch up on Are You Afraid of the Dark? You can pick it up via the link below. Please note that as an Affiliate 80s Baby may receive a commission.