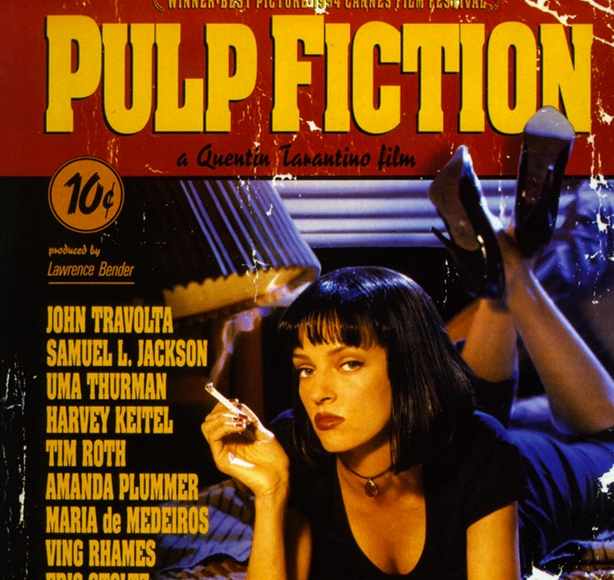 Today is the 25th anniversary of the release of Pulp Fiction, one of the most important films of the 1990s. It holds up remarkably well, Quentin Tarantino’s use of the n-word aside. The many, many movies it directly inspired have not fared nearly as well. Today on 80s Baby I’m going to look at some of those 1990s Pulp Fiction knockoffs.

This is my favorite of the Pulp Fiction knockoffs, mostly due the the strength of the cast. You could remake Scooby Doo: Monsters Unleashed, and if you cast Treat Williams, Jack Warden, and Christopher Lloyd I’d at least watch it on Netflix (Jack Warden is dead so you probably couldn’t do this remake, but don’t let that stop you from trying if you really want to). This is pretty standard 1990s Neo-noir, and it hit all the beats: former mob guy trying to go straight gets pulled back in to do a job for a crime boss so he gets the crew back together, Christopher Walken plays the crime boss, the usual. Instead of one last score, the objective of the job is to “cure” a pedophile, so that’s new. It all goes bad, people die, the end. Boat drinks. Man did they want “boat drinks” to be their “Ezekial 25:17” or whatever. Since we’re all saying it still today, I think they obviously succeeded!

The most obvious Pulp Fiction influences come in the form of the soundtrack and the intersecting storylines, not to mention Miramax put this out and their marketing might as well have been to put up a flashing billboard that said “If you liked Pulp Fiction…” Sometimes it can be difficult to determine whether a 90s movie is ripping off Pulp Fiction or ripping off Lock Stock and Two Smoking Barrels (which itself is in some ways a Pulp Fiction ripoff) so as a friendly guide this one is in the Pulp Fiction camp, whereas Smokin’ Aces is a Lock Stock ripoff, and therefore we won’t be discussing it.

Andy Garcia’s character name Jimmy the Saint is taken from a Springsteen song and the movie’s title comes from Warren Zevon, so I’m assuming the script started as an effort to build a movie entirely from song references and then when Walken came onboard they filled all the gaps with Pulp Fiction. It’s too bad, otherwise we might have gotten a stick up guy named Johnny 99. Here’s some Warren Zevon before we move on, because he’s a gift who we lost too soon.

This movie had three things going for it: 1) it introduced the world to Charlize Theron, who’s managed to put together a pretty decent career for herself since, 2) Eric Stoltz and James Spader, back when they looked enough alike that when I was watching the trailer I thought James Spader was playing two roles, and 3) 80s Baby favorite Glenne Headly, may she rest in peace. Glenne of course played Tess Trueheart in Dick Tracy, which we talked about here. Outside of that, 2 Days in the Valley is one of the most obvious Pulp Fiction knockoffs, going all in on the overlapping and intersecting storylines. Danny Aiello stars, because Danny Aiello made a deal with a crossroads demon to be able to give the performance he gave in Do the Right Thing and forever after was doomed to play this role in mid to low budget Neo-noirs for the rest of time. Two days after the sun swallows up Earth a mob movie starring Danny Aiello will land on Netflix. It will be watchable enough if everybody who is now dead was still alive and couldn’t find anything else they were in the mood for.

I won’t get into the plot. Instead you should imagine what the plot might be for a movie that takes place over two days in Los Angeles and includes cops, mobsters, sexy blonds, a murder, and a sum of money. Then you can watch it on Amazon Prime to see how close your version comes to the actual thing.

Once again, Christopher Walken is the free space on the 90s Pulp Fiction bingo card. In addition Suicide Kings makes the two extremely 90s movie decisions of casting Denis Leary as a tough badass and believing that people want to see Jay Mohr act. I would honestly love to read a story about how the casting decisions in this movie were made, because it has to be more interesting than the actual movie. This is pre-Six Feet Under, so Jeremy Sisto had to have landed this because of Clueless. Likewise, this is pre-Big Bang Theory, so Johnny Galecki was mostly known as Darlene’s boyfriend on Roseanne. Henry Thomas makes sense, since the ET star had a moment in the mid-1990s after being cast in Legends of the Fall. And Sean Patrick Flanery was Powder. Everybody loved Powder. It’s like they went to Leonardo DiCaprio and asked him who he considered for the Pussy Posse  that didn’t quite make the cut.

Christopher Walken spends most of this movie tied to a chair, in a role that’s indistinguishable from the one he played in a wheelchair in Things to Do in Denver When You’re Dead. I’m certain that Denis Leary appears only via cut footage from The Ref. If you have proof to the contrary I’d love to see it. The plot features two kidnappings, a ransom, an inside man, and is the second movie out of three discussed so far where somebody’s debt gets purchased.

If pressed, I’d describe this as Pulp Fiction: The College Years, and I would be willing to bet that’s essentially how it was pitched. It’s a bad movie, but if you absolutely need to see it I bet it’s playing somewhere on cable right now.

If Suicide Kings is Pulp Fiction: The College Years, then Go is Pulp Fiction: the WB Edition. I wanted to love Go when I saw it because it was directed by Doug Liman and I was a massive fan of Swingers when I was in high school. I didn’t hate Go entirely but I didn’t think it was great and if I decide to rewatch it Doug Liman’s not going to salvage it this time. I tried to revisit Swingers for this website, and I couldn’t get through the casino scene at the beginning. That movie belongs in the past, with Big Bad Voodoo Daddy and the notion that Vince Vaughn is cool.

To be honest, the most interesting thing to me now about this movie is the cast. It’s a crazy mix of “famous in the 90s and disappeared,” “familiar in the 90s and super famous now,” and two notable pre-fame roles, in Melissa McCarthy and Jane Krakowski. Go features Timothy Olyphant, Katie Holmes, Taye Diggs, Scott Wolf, Breckin Meyer, Sarah Polley, James Duval (Randy Quaid’s older son in Independence Day), William Fichtner, who presumably appears while simultaneously shooting six other movies and TV roles, Jay Mohr again (somebody somewhere couldn’t get enough Jay Mohr), Natasha Melnick, who I’m only mentioning because she played Cindy Sanders in Freaks and Geeks and I used to be in love with her, and Desmond Askew, a British guy who came out of nowhere to star in this movie and then scuttled off back to nowhere. That cast is certainly a list of names of people you’ve probably heard of.

Go heavily aped Pulp Fiction in several ways, but the most obvious one is the depiction of scenarios from several different perspectives (yes, I know Rashomon exists, but c’mon, Go‘s doing Pulp Fiction here). It also ran with the bodies in trunks/finding ourselves in precarious situations because of drugs/etc. scenes that originally appeared in Pulp Fiction. It’s as if the screenwriter watched the Tarantino movie with a pad of paper and noted every scene that he needed to have a version of.

This has been an overview of four movies obviously inspired by Pulp Fiction! It was going to be five but I’m already at 1350 words and nobody needs another capsule review of 8 Heads in a Duffel Bag. In conclusion, watch Pulp Fiction instead of these. It is still a very good movie.

What’s your favorite Pulp Fiction ripoff? Let us know in the comments or on Twitter.