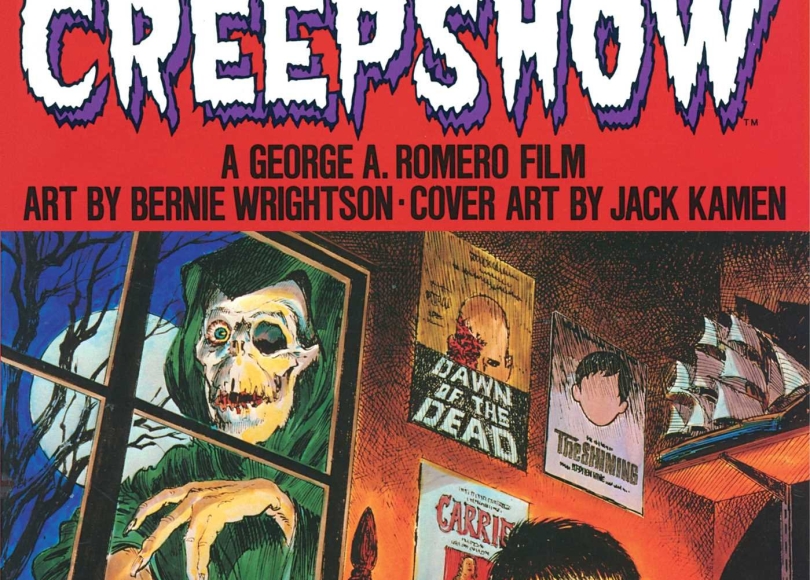 “You see that crap? All that horror crap? Things coming out of crates and eating people? Dead people coming back to life? People turning into weeds, for Christ sake?”

Late night, Anytown, U.S.A. A young boy is berated by his father for reading horror comic books in his bedroom while his mother fixes some holes in a pair of pants. The boy curses his father, who is pouring a beer, then The Creep shows up to take care of things. So begins Creepshow, Stephen King and George A. Romero’s anthology film somewhat based on the various horror comic book series put forth by E.C. Comics throughout the fifties. 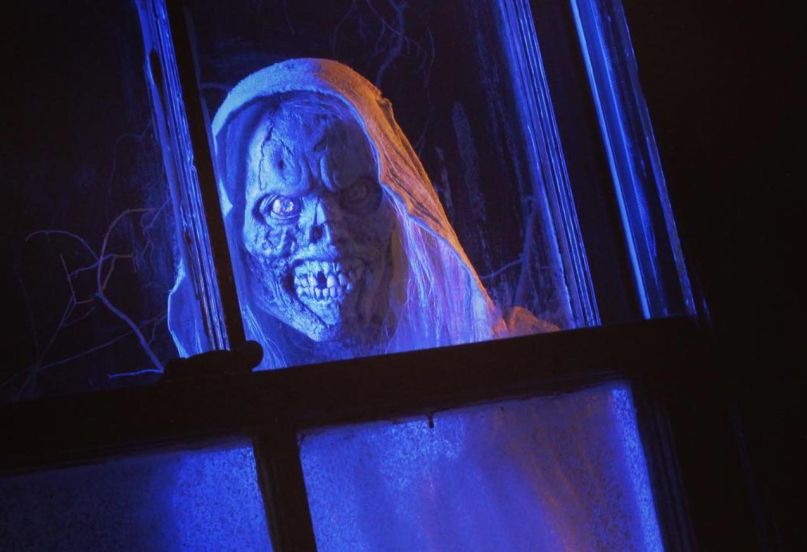 The first story, “Father’s Day,” involves the family of a very rich and emotionally abusive man who made his fortune bootlegging and was murdered by his spinster daughter on the aforementioned holiday. The daughter drunkenly visits his grave to reminisce and spills whiskey, bringing his corpse to life, and you can only imagine how that works out for everyone. This might be my least favorite of the stories, but it’s still fun and Ed Harris shows up for a few minutes as an ill-fated grandson-in-law (the cast for this movie is pretty great). The ending is a lot of macabre fun and the re-animated corpse is both corny and creepy, which is exactly what I want from something like this.

“The Lonesome Death of Jordy Verrill” is next, and it stars Stephen King (based on his own short story) as the answer to the question “What if Simple Jack from Tropic Thunder was slightly smarter and left to his own devices on a farm for years?” A meteor lands on his property and he hams it up trying to figure out if this will make him famous or not until he gets goop on him. The goop turns into weeds (so many weeds!) and he displays a wide array of broad facial expressions as he fantasizes about how a doctor might react to what this does to his hands and body. Think Wolfman, but if he was green and kind of stupid. The over-the-top Universal Classics homage score meets his performance halfway, and since this is all supposed to be ultimately more fun than scary, it all kinda works.

Now we’re at “Something To Tide You Over,” which I find to be the most memorable and my favorite of the five stories. Leslie Nielsen stars as a cuckolded husband seeking revenge on his wife and her lover (Gaylen Ross from Dawn of the Dead and Ted Danson, starring as a man who can bench 300 pounds). He buries them in the sand up to their necks, then rigs a television so Ted Danson can watch his lover suffer as the tide comes in. This is by far the most unsettling part of the movie, but the twist ending brings it back into corny fun territory. Leslie Nielsen is great playing completely unhinged and it’s fun seeing Ted Danson right before Cheers. Also Richard Gere shows up for a second on a TV. 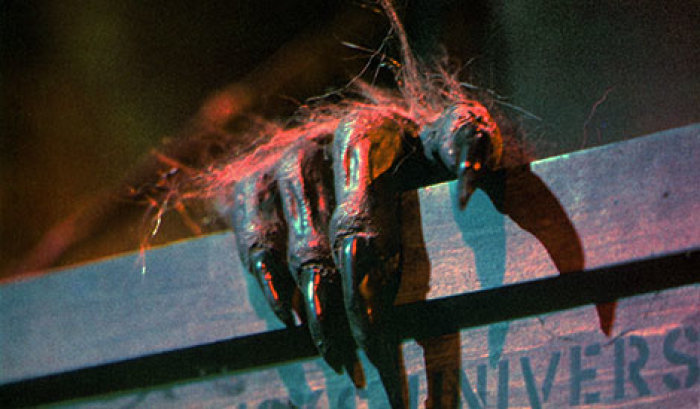 Story number four, “The Crate,” involves a mild-mannered college professor, his abusive and perpetually drunk wife Wilma, and a murderous carnivorous ape! A janitor finds a mysterious crate from the arctic and summons his friend Professor Stanley to help him open it. Of course, inside is Fluffy the Crate Beast (the ape from two sentences ago), who immediately devours the janitor. Professor Stanley calls upon his friend Professor Henry Northrup, who fantasizes about murdering his very mean wife Wilma (Adrienne Barbeau from Swamp Thing!) and might finally have a way to deal with her. She drives drunk so it’s actually good that he tries to get rid of her. Fluffy is clearly a man in an ape costume (think Harry from Harry and the Hendersons fame, but like if he was from Hell instead), but that’s kinda what I want and expect from this movie and it is very entertaining.

Finally, we have “They’re Creeping Up On You,” which boasts a $125,000 budget on cockroaches alone. This is definitely the grossest of the stories, because these aren’t the fun party-time roaches of Joe’s Apartment. This one’s about a mean-spirited old man named Upson Pratt, who lives in a hermetically sealed apartment due to his mysophobia. He takes phone calls all day from people telling him what an awful man he is, laughing them all off. One night, he finds himself surrounded by roaches and it’s time to pay the piper. Personally, I think if he didn’t crush the roaches he’d probably be better off, because that’s how they spread their eggs, or so I’ve been led to believe (not gonna research it). This one boasts a delightfully cranky performance by film legend E.G. Marshall (12 Angry Men).

Should I Show This To My Five Year Old?

Probably. It’s a good introduction to Stephen King for a child, plus they’ll learn about the dangers of cuckolding and handling meteors. There are a lot of great life lessons to go over here, and maybe it’ll help keep your child away from the beach for a while too. That’ll be nice for all the adults looking to relax there. Also, if you’re nicer than the dad in the wraparound segment, it’s a good way to show your kid how kind you are in relation to that dad (played by Tom Atkins, who’s in Halloween III: Season of the Witch, which I will be writing about next). The child is even played by Joe Hill, who is Stephen King’s son and a good horror writer in his own right, so you can use him as an object lesson about following in your footsteps but never overshadowing you.

Yeah, this movie rules. It’s fun throughout, and I would say it’s very possibly the best movie Stephen King wrote the screenplay for (I love Maximum Overdrive but I wouldn’t say the script is particularly strong). It feels like five solid episodes of Tales From The Crypt strung together, in the best possible way. Anyway, check this out and also why not check out the new Creepshow series on Shudder, who is not paying me to mention them here?

If you’ve never seen Creepshow you can rent it below for just $2.99.