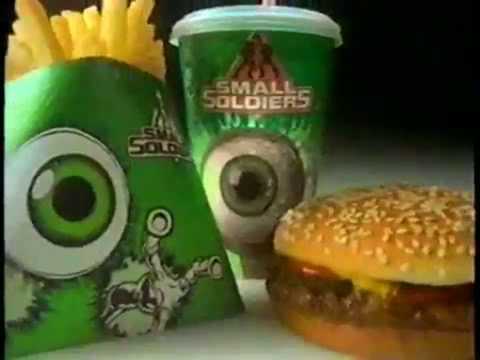 Pretty much this entire website is me talking about things I used to be into that don’t exist anymore. This is more of the same, with the exception that in this case these are products from well known fast food chains, and while the chains are still going strong (some might disagree about that statement when it comes to Arby’s, and I say hey, back off) these items have fallen by the wayside. I haven’t necessarily had all of these, but the ones I didn’t either caught my eye due to the marketing or I regret that I never had the opportunity to try them.

This never really ended up on my radar as a young child, and it’s a shame because it would have easily been one of my favorite burgers (it’s also pretty similar to the local sandwich for Cavs player Brad Daugherty that I mentioned in this article). The cheddar melt was introduced in 1988 and was around until 1989, with an aborted attempt to revive it in 2004. It consisted of only four ingredients: rye bun, patty, cheddar cheese sauce, and grilled onions. My introduction to eating onions was through the small, diced ones on the McDonald’s cheeseburger, and grilled onions weirded me out until my palette matured. Even so, the idea of a melty cheddar sauce is too great to pass up. I’m very surprised a variation on this isn’t available today, given the simplicity of its construction.

I need to begin by acknowledging that this burger doesn’t go away so much as go into extended periods of hibernation. In fact, Burger King currently offers a Rodeo King Burger on its menu, a fact I would have known without discovering it online if Burger King’s fries weren’t so butt that there’s no reason to ever go there. But go there I did in 1998, the year I graduated from high school, and I have very vivid memories of both this burger and the movie tie-in involved in its launch. First, the burger. It was a standard Burger King cheeseburger with onion rings and barbecue sauce on it. That’s it. Pretty simple stuff, but I loved it. I enjoyed it so much that at my short order cook job that summer in Vermilion, Ohio, I invented my own version and we sold it as a special. “Invented” is generous; I copied Burger King, but it was a solid imitation. The movie tie-in was Small Soldiers, an underrated Joe Dante picture that got lumped in with Toy Story despite very different themes, which I admit I did as well at the time. I also hated it when I first saw it, mostly because I went to it with my friend Brian’s girlfriend’s friend, on the lead up date to the worst date I ever had. First date was fine but uneventful. We were set up to get us to move on from other people. We saw Small Soldiers, it was fine. On date #2 we went to dinner at Max and Erma’s. She excused herself to go to the bathroom and when she came back she did not say another word for the duration of the date. Just decided not to talk anymore. I found out later it had nothing to do with me, she decided she missed her ex-boyfriend so much she couldn’t be bothered to interact with me anymore. Anyway, it tainted Small Soldiers for me, my opinion of Max & Erma’s remained unchanged (it was maybe the second time I’d been there and I’m pretty sure there wasn’t a third), but the Rodeo Cheeseburger ruled too hard to get caught up in the undertow. As I mentioned, it cycles back into the rotation at BK every few years and there’s a version there now, so it’s available to check out if you want to.

I should begin by saying I never tried the Bigfoot Pizza. The inclusion here is solely based upon an appreciation for the ad campaign. My parents weren’t big on picking up the gimmick options that chain pizza places introduced, so we mostly stuck to the standards. Haley Joel Osment appeared on an episode of Doughboys, the greatest podcast in the world, and revealed that his first acting job was the commercial for Bigfoot Pizza that you see above. In the event you miss him, he’s the tiny human in the sandbox. So even if Bigfoot Pizza wasn’t any good, and I honestly have no idea, it gave us Haley, so it’s worth it for his Silicon Valley character alone.

Bigfoot was introduced in 1993 and discontinued a couple of years later. Based on the images and videos, Bigfoot looks like a Detroit style pizza. It also closely resembles the DiGiorno Crispy Pan Pizzas that were released a year or two ago, and I’m guessing Bigfoot probably fell closer to DiGiorno on taste than Detroit style. And you know what? Good. Those DiGiorno pies are pretty solid as frozen goes, so even the baseline probably wasn’t awful. Apart from the shape being different, there wasn’t much about Bigfoot that distinguished it from any other chain pizza. You have to wonder if it even deserved the moniker of Bigfoot, given that its 16 inch size paled in comparison to Little Caesars’ three foot version. I will say that having lived in NYC for a decade, it pains me to even think about carrying either the Little Caesars or the Pizza Hut version home.

I love Arby’s. When I read an attack on Arby’s (of which there are many), it’s like reading an attack on one of the family members of mine who I actually like. All of this sadly misguided Arby’s hatred might explain why there’s practically no information on the history and discontinuation of Arby’s Onion Petals on the Internet. Based on my best guess, the onion petals were phased out around 2005 or 2006. I’d probably have a better handle on this except that for the past 20 years I’ve lived on the East Coast in areas where there weren’t really any Arby’s. Maryland had one out on the Rockville Pike, and only now is New York City starting to get them again in accessible areas. So I hope that I can be forgiven in not being able to precisely pinpoint when the petals blinked out of existence like Spider-Man at the end of Infinity War.

As for their introduction, I believe that they were introduced in the late 1990s or early 2000s along with mozzarella sticks and potato cakes. It was part of the Arby’s attempt to expand their menu that continued with the debut of Market Fresh sandwiches in 2001. The petals were essentially deconstructed Bloomin Onions, with a dipping sauce that closely resembled the one that came with the Bloomin Onion or the Burger King zesty sauce for onion rings.

Arby’s onion petals were the ideal at the mall between meals snack. When my college friends and I made weekend trips to Smash Records and the Georgetown Mall, I would often pick up an order of onion petals from the small food court there. It’s insane to me that the mozzarella sticks still have a spot on the menu staked out, but the onion petals were unceremoniously dumped more than a decade ago (although if you listened to my podcast Arby’s Isn’t That Bad, you know that Arby’s makes killer mozzarella sticks).

Several french fry redesigns could conceivably land on this list, but I decided to include Burger King’s because it’s the only redesign that led me to completely give up on ordering the product. Growing up, Burger King was never the destination that McDonald’s was for us, but we still made stops there with some frequency. The biggest highlight by far was it was the only one of our regular fast food places at the time that had the soft drink dispensers on the customer side of the counter. For a child under 10, this of course meant a little bit of every pop, resulting in something fun but practically undrinkable. Other than that the food was fine but unremarkable. The burgers were different from McDonald’s, but they still tasted like cheeseburgers, and to a kid the french fries were indistinguishable from McDonald’s ones (Wendy’s had the fat ones, so obviously those weren’t the same). The fries were fine and familiar.

This changed at the end of 1997, when Burger King rolled out an elaborate campaign taking on McDonald’s head on by highlighting their new french fries. The commercials featured Mr. Potato Head, which is honestly pretty messed up, and also animation from Nick Park of Wallace and Gromit fame. In January of 1998 they even offered free samples of their new fries nationwide. The only problem is that the fries sucked. They were a significant departure from the previous offering, in that the previous ones were edible. These were crispy, but not in a well fried way, instead in a “we put batter on these now” way. The fries were a take on beer battered, which I certainly wasn’t looking for in my fast food fries. Apparently a lot of other people weren’t either, because shortly thereafter Burger King introduced the option to choose either fries or onion rings with your value meal. Subsequent to this change, I only went to Burger King for the rodeo cheeseburger mentioned earlier and on road trips, because Burger King is heavily represented in highway rest stop plazas on the East Coast. The common thread in all of those subsequent trips is that I always opted for onion rings. I don’t even like the onion rings, but I’ll still take them over the fries.

I haven’t had the Burger King fries in so long that I wasn’t even aware until I started writing this article that Burger King changed their fries again in 2011. They haven’t even served the fries I hate in 8 years, and I never even knew because they turned me off of fries there. Apologies for not bringing up beef tallow fries at McDonald’s, or the fat and puffy fries at Wendy’s, but while I miss both of those, their successors offered enough to keep me interested. Burger King did not.

What are some defunct fast food items that you miss? Let us know in the comments or on Twitter.