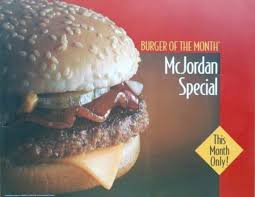 One of my favorite things is regional fast food variation. A lot of people have dream vacation destinations; I have a list of dream burger destinations. I also was raised from birth to be a Cleveland sports fan (this happens to some degree by osmosis no matter how much urging or lack thereof is done by your parents) and raised with a healthy (you know what I mean) appreciation for all things fast food, so I love the idea of athlete branded fast food items.

In putting together this article I wanted to feature entries that weren’t exclusively based in Northern Ohio, so I unfortunately do not have first-hand experience with a lot of these, but I still think that finding out about them is fun, and the commercials are excellent. Bad acting by athletes is the best type of bad acting.

Introduced: 1992-ish (the basketball cards included advertise Team USA, so this had to be in the run up to the Dream Team Olympics)

When I was in middle school, my best friend CJ’s parents were Cavs boosters. This meant that they received tickets to a lot of games, and consequently I attended more Cavs games than I did any of the other Cleveland sports teams (I’ve still only been to one Browns game. It was October 1, 1989, against the Broncos. The Browns won). This was a great time to attend a lot of Cavs games, because the late 1980s-early 1990s Cavs teams were good. Brad Daugherty was a huge part of those teams. Picked #1 in the 1986 Draft, Daugherty was one of the best centers in the NBA during his tenure with the Cavs, which was cut short due to persistent back problems.

All of this is lead up to say that unfortunately I don’t remember this burger. It’s odd, because I was going to McDonald’s a lot around this time. When they started the Dream Team cup promotion I collected every single cup, and now I’m realizing that they might still be somewhere at my parents’ house. So missing this certainly wasn’t for lack of being there. It’s a shame, because this is close to my ideal burger. Anybody who knows pretty much anything about me knows that I have an intense love for Arby’s, and the Beef and Cheddar in particular, so I’m an advocate for cheddar cheese sauce on sandwiches whenever it can be added. I also appreciate that the price point for all novelty sandwiches at McDonald’s in the early 1990s appeared to be $1.99. McDonald’s toys with cheddar burgers every few years, and I think they should just dive in with both feet and keep it on the menu permanently. Name it for Brad Daugherty again, and make it nation-wide. Nobody will get it. This can be McDonald’s weird Twitter moment. In six months it’ll be married to Moon Pies and feuding with Steak-umm.

Now this I remember. The MDP was a triple cheeseburger with bacon, and unlike Marla getting involved with “Jack” in Fight Club, it did not meet me at a very strange time in my life. It met me when I was a 5th grader playing sports every day, year ’round, and I was eager to show the world just how capable I was of eating triple cheeseburgers. We were a great match, if only for a limited time.

Michael Dean Perry the football player was a defensive tackle for the Cleveland Browns, and the younger brother of William “The Refrigerator” Perry, 1985 Bear, WWF wrestler, and GI Joe action figure. Cleveland tried calling Michael Dean “The Ice Box” and it sort of worked, I guess. He was a solid player, and this was a solid sandwich.

Like Beetlejuice, you mention The Fridge and he appears. In this ad for The McD.L.T., Perry is joined by Bears teammates Dave Duerson (RIP), Dan Hampton, and Steve “Mongo” McMichael (RIP WCW Monday Nitro). This is obviously not a Bears-specific burger; instead it was part of the roll-out of the McD.L.T., an incredible innovation in burger presentation where the packaging permitted you to keep “the hot side hot” and “the cool side cool.” I was still squarely in Happy Meal age range at the time, so I don’t know how well it accomplished what it claimed, not to mention to this day I still remove lettuce and tomato from all burgers.

The 1985 Bears are the first professional football team that I clearly remember, because they offered a spectacle that few prior teams had at the exact time I started to pay attention to sports. As a result, I can probably still name close to a dozen people who played on that team. And I owned that Fridge GI Joe I mentioned earlier.

One last note: I understand how wasteful it and terrible it is for the environment, but I still love the Styrofoam McDonald’s packaging. Aesthetically speaking it’s gorgeous.

Speaking of those 1985 Bears, here’s the man everybody knew from that team. The mid to late 1980s was a glorious time to be alive for a lot of reasons, but if you were alive and a manufacturer of sunglasses, you were on top of the world, and Jim McMahon was etched onto your personal Mr. Rushmore. McMahon was the quarterback of that Super Bowl winning Bears team, and he checked off every box when it came to 80s cool: sunglasses, headband, and anti-hero persona. It’s surprising that he never got involved with the other McMahon, because he was tailor made for professional wrestling.

As an iconoclast, McMahon couldn’t be expected to shill for something as mainstream as McDonald’s. Instead, he helped usher the Taco Bell Steak Fajita into the world. This is where I lose all credibility as a lover of fast food with a lede burying confession: I never tried Taco Bell until my senior year in high school. There’s no one particular reason why, except that it wasn’t a usual family spot and I, as a picky eater, wasn’t about to frequent a place that used rice and beans in multiple menu options. Of course I love Taco Bell now. Of course I do, BUT…I’m still pretty unadventurous when it comes to diving into their menu. I stick almost exclusively to hard shelled beef tacos, with a partial swap for a Doritos Locos Nacho Cheese and my new personal Holy Grail item, the Cheesy Gordita Crunch. Yes, I’m ashamed it took me this long.

As for the steak fajita, it’s not offered anymore, or at least it’s not specifically called that but it wouldn’t take too much menu engineering to order one. Jim McMahon continues to rule, and will continue to play an outsized role in the sports memories of 80s kids.

I’m covering these two together, because 1) it’s the same burger, 2) Bird and Jordan were linked closely in both the NBA and the McDonald’s universe, and 3) the entry immediately following this one is Jordan and Bird again, together. These identical sandwiches were introduced during the run up to the 1992 Olympics and The Dream Team, an event so big that 27 years later it was a major plot point on the most recent episode of What We Do In The Shadows. As McDonald’s burgers go, it’s a bacon cheeseburger with barbecue sauce, essentially a less beefy version of the MDP above. All three signature burgers included in this article are variations on my childhood (and adult) McDonald’s wheelhouse burger: Cheeseburger, usually with bacon, no veggies beyond onions and pickles. This is also the reason I have no firsthand experience with the McD.L.T. (or the Arch Deluxe, or even the Big Mac apart from a single time. Yeah, I’ve only had the Big Mac once in my life, and it was within the last five years. Lede buried again).

Solid looking burger, love how they played up the “I’m a simple hick from Indiana” crap for Larry Bird like he wasn’t one of the most calculating and aggressive NBA players of all-time. I hated Jordan as a child because he broke the Cavs year after year, and I hate him now because he was a bully.

We just learned in the previous commercial that Larry Bird eats like 6 burgers at a time, and we’re supposed to believe he’s going to try this hard for just a Big Mac? I decided to include this because I consider it to be one of the best known ad campaigns of all time. There was a point in my life where every time we played basketball somebody would reference “off the scoreboard…nothing but net” or something while we we played. I talked about the linking of Jordan and Bird in the previous paragraph, and this was it on display. There was also the Jordan v. Bird video game and handheld Tiger game (will cover this in a future installment), of course. The early 80s was Magic and Bird, but by the time the 90s rolled around Jordan took over that role from Magic.

I know I mentioned at the beginning how it seems silly for Bird to compete for just one Big Mac, but both of these athletes were known for being so insanely competitive that I have no doubt something like this probably happened during an All Star weekend or during the 1992 Dream Team. Love the touch at the end, where they’re on top of the Sears Tower. What a great commercial.

I asked my wife Amy if she knew of any local Boston TV spots for this article (apart from the Bird one I found) and she couldn’t think of any. I came across this one while searching YouTube, and I’m including it because it captures another 90s moment so beautifully: Long Distance Code Ads!!!!!!!!

It’s difficult to think of anything else from the 1990s that was so important to people at the time and practically meaningless today. I happen to live in NYC, so I know that there are large immigrant communities in the country that still purchase phone cards to call internationally, but cell phone plans have essentially eliminated the concept of domestic long distance calling. To think that 23 years ago it was such a big thing that there were multiple long distance advertisers and a fast food chain and cable network built a campaign around it, and it basically doesn’t exist at all in 2019 makes me want to run off and live in a cave, with my Book It! pin and WWF Superstar figures. Where does the time go?!

Anyway. The ad. Papa Gino’s is an okay Massachusetts pizza chain affiliated with D’Angelo Grilled Sandwiches, an okay sub chain. Both are going through massive upheaval right now because the parent company filed for bankruptcy, and my unaware Papa Gino’s loving wife was distressed to hear that this morning. NESN is the home of Boston sports, and Mo Vaughn was a rad 1990s slugger. Mo was the MVP in 1995. It probably should have been Albert Belle from the Indians, but everybody hated Albert Belle, and besides, AB + Phonecard =/= MVP.  Today, Mo Vaughn runs a transport company based in the Cleveland suburbs, which I only know because he advertises at Indians games.

Do you remember any of these sandwiches? Do you always call bank now because of the Jordan/Bird commercial? Let us know in the comments or on Twitter.