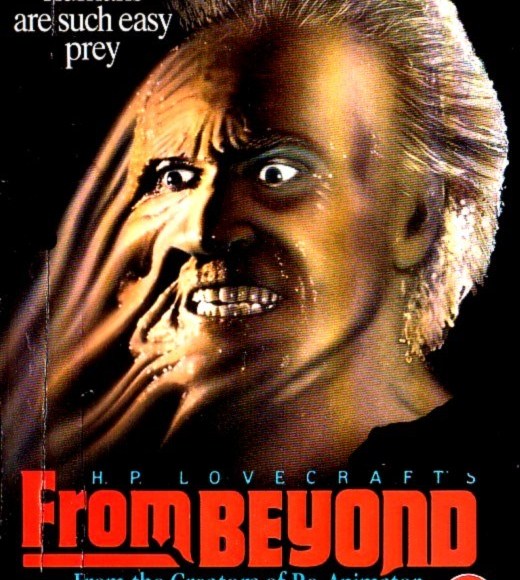 “The five senses weren’t enough for him. He wanted more”

A pair of scientists, Dr. Crawford Tillinghast and Dr. Edward Pretorious, have stumbled upon a discovery that could change mankind forever: a sixth sense that allows you to see another dimension once your pineal gland is stimulated. Unfortunately, upon opening that dimension, they find that it seems to be mostly made of flying phallic worms who are very upset. Though Crawford begs him to turn off the Resonator, the machine that allows them to access the dimension, Dr. Pretorious refuses and his body is shortly found sans head. Thus begins From Beyond, director Stuart Gordon’s second (and in this writer’s opinion, best) gruesome H.P. Lovecraft riff.

This was a hard article to write, because both times I turned it on to write my notes I was immediately sucked into this movie’s viscera soaked, day-glo, psychosexual nightmare. This movie has an all-star horror trio right up front, including Jeffrey Combs (Re-Animator, The Frighteners), Barbara Crampton (Chopping Mall, You’re Next), and Ken Foree (Dawn of the Dead, and I think that counts as more than enough street cred for anyone). They’re all excellent and sell the movie when the budget for the effects doesn’t quite do the job. Barbara Crampton and Jeffrey Combs are especially good here, and you can tell they love working with Stuart Gordon, this coming right on the heels of Re-Animator.

The only thing that I’m not quite sure comes together is the linking of Dr. Pretorious’s BDSM tendencies to his eventual madness. The message is a bit jumbled and it’s implied his tendencies are linked to his impotence and I’m not quite sure it’s very well realized, whatever they’re trying to say, if anything. (The director and cast commentary talks about it in relation to their passions being unlocked, but it feels strange that this is mostly tied to the villain, because that’s not really inherently a bad thing. It just feels a little confused.). This also leads to almost everything involving the Resonator being phallic, from the weird penis worms that bite Crawford right up top, to the “third eye” that opens in the pineal gland and peeks out (the hole it bursts out of looks like a butthole but I’m not sure that was as intentional.) It leads to pretty visually interesting art design and set pieces though.

The effects mostly look pretty good, especially considering the low budget. Pretorious is genuinely unsettling, especially the more he morphs into his monstrous form, and the jellyfish that bites Ken Foree is very creepy. I can’t stress enough how impressive the effect of the pineal gland bursting out of Jeffrey Combs’s forehead looks. I’ve seen this movie a handful of times and I can’t figure for the life of me how they pulled it off. There are definitely some prosthetics involved, but how they get it to move the way it does, I don’t know. It’s just cool. 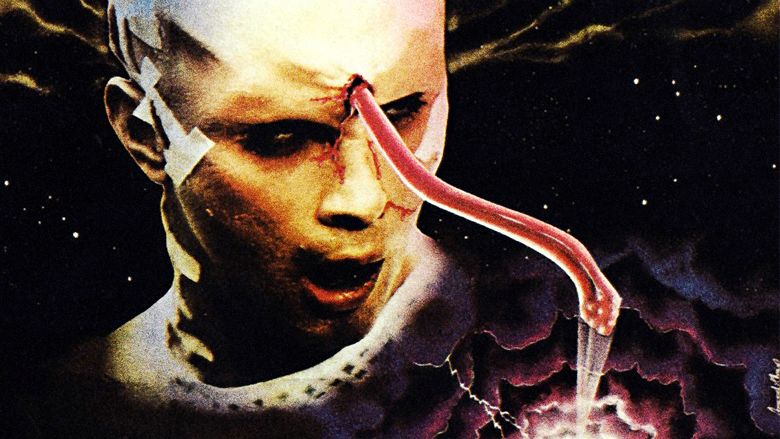 – The two leads and Stuart Gordon made a third Lovecraft movie, the even more disturbing Castle Freak, which I can also recommend.

– Stuart Gordon wrote Honey, I Shrunk The Kids shortly after this, and that is incredibly funny to me.

– The MPAA hated this movie and claimed it had “about ten times too much of everything” for an R, and yet they managed to get there with minimal cuts.

– The POV shots when they’re in touch with the extra sense looks a lot like Predator’s infrared vision from the movie Predator, which this… predates.

Should I Show This To My Five Year Old?

Depends on the five year old, but I think it’s mostly okay if you have a long conversation with your child about how some people have certain kinks, and that’s okay. It’s probably also important to use this as an object lesson to remind your child not to play god with their senses. It’s never too early for a child to learn that using machines to access otherworldly dimensions is a bad idea and can only lead to jellyfish with sharp teeth and a hell of a temper. If your child is interested in goopy and gory practical effects, they’ll love it. This is also probably a pretty interesting way to get your kindergartner into H.P. Lovecraft, for all of you with children who are avid readers of the macabre.

This movie is so much fun. It’s got something for everyone: crazy practical effects, vomit, all manner of other viscera, many monsters attempting to swallow a live human whole, Ken Foree in briefs lunging at a giant worm with a knife, a man covered in bees, Jeffrey Combs being politely asked to stop eating a brain in a hospital and refusing, just incredibly satisfying all around. Again, a nurse walks in on Jeffrey Combs eating a brain and literally says “Please stop.” It’s wild. I recommend this movie for every man, woman, and child.