In the past people did drugs. But then in 1990 Cartoon All-Stars to the Rescue aired, and nobody ever did a drug again. Until a Democrat re-took the White House, that is. It must be a causal relationship, because the first people you see watching Cartoon All-Stars to the Rescue are President George H.W. Bush and his wife Barbara. See, George and Barb do not want you kids to do drugs, but they fear that their warnings will be ineffective. The only thing left to do is to enlist individuals that everybody knows children respect, like Gonzo, Garfield, and above all, Alf. Seeing that Hawaiian shirt, children probably told themselves “Alf is the ultimate party dude. He loves to get down on some drugs!” Au contraire! In fact it is the opposite; Alf does NOT want you to do drugs. The kids are in danger. Danger from drugs. If only these stars of Saturday morning cartoons could come to the rescue. Baby, we’ve got ourselves a crossover.

Before I go any further, I need to admit that I love this special so I’m not coming into this with any illusions of neutrality. I have the cover image above framed in my apartment. I put on a live reading of Cartoon All-Stars featuring a bunch of comedians and a small handful of audience members. This special reached into my ten year old brain and pulled out the key to making me easily fall in love with something: give me a crossover. I previously mentioned my love for crossovers when I discussed my favorite comic book a few months back. This was the ultimate cartoon crossover! All of my favorite Saturday morning stars packed into a single show, plus the Chipmunks were there. When I was young I didn’t fully grasp that things like this could be done. How did they get both Bugs and the Muppet Babies? They’re from two different worlds!

How exactly has the evil scourge of drugs managed to bring together the 1992 Dream Team of cartoon characters? By targeting Michael! Michael is Corey’s older brother and role model, and she’s concerned that he’s headed down the wrong path, so Corey needs a team of “All-Stars” to come to the “Rescue” and put Michael back on the straight and narrow. In doing so they’ll have to counteract the influence of Smoke, the anthropomorphic cloud and local drug pusher. Will Baby Kermit and pals succeed? Probably. You think George and Barb would’ve stuck themselves at the beginning of this thing without knowing the outcome beforehand? Jumping into things without a plan was more of a thing for their son.

Given that the outcome is predetermined, let’s turn our attention to the talent that was gathered for this rescue and highlight some notable appearances.

This is one of if not the most important meeting Michael has in his struggle to resist drugs. Michelangelo is on record as being a party dude. Alf’s got the Hawaiian shirt, but Mikey’s labeled a party dude right in the opening theme song! Partying and pizza make up at least 75% of his personality (the rest is nunchuck tricks and surfer slang). While the crossover rules, if we’re being honest putting Michael on the straight and narrow shouldn’t have involved more than just having a meeting of the minds Micheal a Michael. This kid is especially dense, unfortunately. 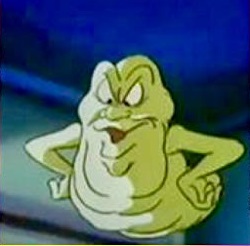 Slimer does nothing to help (Although he does say “That’s bad news” and “Let’s help him.”) He shows up a couple of times and makes some Slimer noises. That’s it. He’s so worthless he might as well be one of the Chipmunks. Man I always hated the Chipmunks. I’m highlighting Slimer because every group needs a member who doesn’t actually contribute apart from vague encouragement but receives a share of the collective praise when the group accomplishes something. Slimer is Brian Scalabrine. 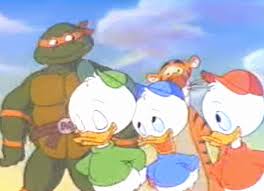 Every good rescue operation needs a musical number, and this one picks the three characters that are most difficult to understand outside of the green ghost to kick one off. This is basically their only contribution to the story but as you can see below in the lyrics I’ve pulled from the script I transcribed it’s an important one. 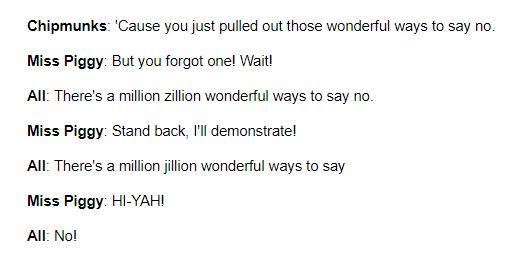 Brings the house down.

Michael’s Face in This Scene

How many cartoons have you seen where the main character gets to view his own drug-addled corpse? This is hardcore.

Bugs does some quality bit work in this special. Bugs sets out emphasize the “tainment” part of edu-tainment and honestly he nails it. Like every good comedian, Bugs doesn’t let serious subject matter get in the way of a well-placed punchline.

I hope you enjoyed this taste of Cartoon All-Stars to the Rescue. If you’ve never seen it before and must watch the whole thing now you can watch it below.

What was your favorite Say No to Drugs Special episode of all time? Let us know in the comments or on Twitter.

You can own your own Cartoon All-Stars to the Rescue poster by clicking through the link below. 80s Baby may receive a commission.