So much of what we remember fondly is colored by nostalgia. That’s the entire reason this website exists. A lot of things that we love are meaningful to us because they’re linked to a certain time, place, and memory. For this reason, rewatching shows and replaying games that we once loved can be a huge letdown when it turns out that the object of affection is very much of its time, or even worse, was never any good to begin with. With this in mind, today on 80s Baby we will be launching a new column: “Is This Rewatchable?” While this could be applied to anything covered here, in the column we will take an occasional deep dive into something that I (or a guest writer) cared about as a child, to see if it can stand on its own. 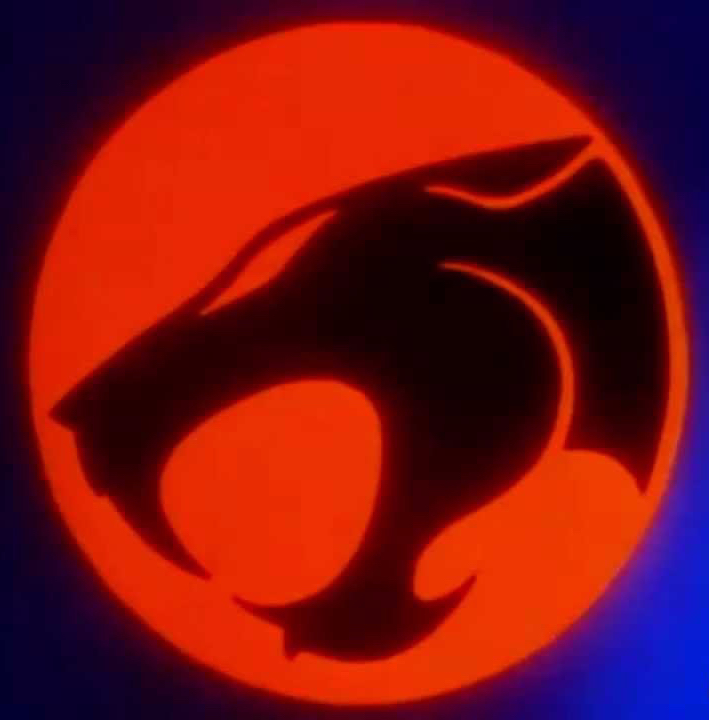 The first entry in this series is ThunderCats. I don’t want to tip my hand this early but ThunderCats was the inspiration for the column (and having to capitalize that C every time I write it is not improving my feelings towards the show). It showed up on Amazon a couple of years ago, and after I failed to turn my watching experience into a decent stand up bit I remembered it recently and figured that maybe I could turn it into a decent article. I’m about to rewatch the pilot episode and while I’m going to get into it shortly first I’ll provide a little background on the show.

ThunderCats debuted in 1985 and ran for four years and 130 episodes, plus a TV movie. The final episode aired on September 29, 1989, my 9th birthday. I don’t remember what I was doing that day, but odds are I may have watched ThunderCats as part of the festivities. More likely I was playing Nintendo and eagerly awaiting whatever new games I’d asked for that year. Unlike most of the cartoons produced in that era that served as tie-ins to an already existing toy line, ThunderCats the cartoon technically existed first. The LJN toy line was based on the animated series, which while it debuted in 1985 was actually created in 1983. The other difference is that unlike many of the cartoons on the air at the time ThunderCats wasn’t a Filmation release; it was made by Rankin/Bass Productions, the legendary producer of Christmas specials like Rudolph the Red Nosed Reindeer, The Little Drummer Boy, and The Year Without A Santa Claus, although by the time Rankin/Bass put out ThunderCats the studio was not long for this world. The studio closed up shop in 1987. Filmation is another once respected studio, although it is best known to 80s kids as the producer of quick and dirty, cheaply animated fare like He-Man and the Masters of the Universe, She-Ra: Princess of Power, Ghostbusters (the one with a gorilla), and the Adventures of Fat Albert and the Cosby Kids.

ThunderCats tells the story of the Thundereans, humanoid anthropomorphic alien cats. They fled their homeworld Thundera and end up on Third Earth, where Lion-O, Cheetara, Panthro, Tygra, WilyKit, WilyKat, Snarf, and ghost Jaga protect the Sword of Omens from evil mutants and defend the inhabitants of Third Earth from the evil Mum-Raa. Got all that? Clear as mud, right? A bunch of cat people whose society’s power comes from a mystical eye embedded in a magic sword fight against mutants and a mummified sorcerer. Also their leader, Lion-O has the mind of an adolescent in the body of a man. A lion man. Maybe it’ll help if we dig into the first episode.

The first thing you notice before turning on ThunderCats is that the dumb show is no longer available on Amazon Prime. You then try Hulu; no luck there either. Netflix doesn’t have it, and at this point you’re getting annoyed and have sworn off The Little Drummer Boy for life in a futile act of revenge on a defunct animation studio. You go to YouTube and watch it illegally instead, something you shouldn’t have to do when you’re subscribed to MULTIPLE STREAMING SERVICES. Then you discover that what’s billed as full episodes of ThunderCats on YouTube isn’t actually full episodes, so you go back to Amazon and pay two dollars in order to finish writing this article.

The first episode of ThunderCats opens on the ship as the ThunderCats flee their dying home world to start anew. The first thing you notice is that all the ThunderCats are naked, including the children. This is weird. Weirder still, they don’t have genitalia, and Cheetara has no nipples. Oh, and they’re wearing belts and boots. And Jaga has clothes on. I did not remember from childhood viewings that the ThunderCats are all naked for some reason when the show starts, and it’s honestly kind of difficult to get past. It’s then directly addressed by Jaga, who says “on your home planet you needed no protective clothes and weaponry” and he magically clothes them. Plus he was wearing clothes the whole time, which when everybody else is naked makes you the weirdo.

All the Thunderian ships are attacked by the mutants, who aren’t really mutants any more than the ThunderCats are. They’re humanoid animal aliens: lizard men, wolves, apes, etc. The ships are all destroyed except for the flagship, because it contains the Eye of Thundera, embedded in the Sword of Omens. The mutants board and try to take it, but young Lion-O wields the sword with the assistance of the Eye and drives the mutants off. Due to ship damage, the ThunderCats must change their course, and they decide on a blue planet third from the sun, enough information that even an 8 year old gets that they’re really talking about Earth. All of ThunderCats except for Obi Jaga go into suspended animation, and Obi Jaga pilots the ship until he expires from old age and crumbles into dust/smoke(?) 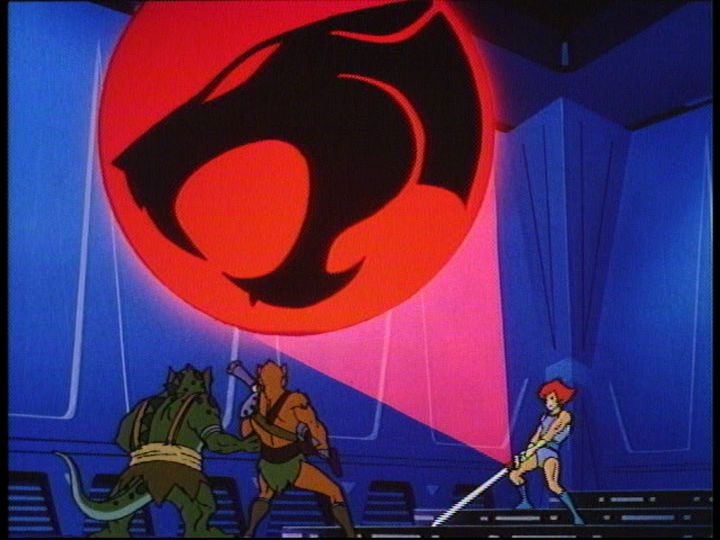 The ThunderCats land successfully on Third Earth. Lion-O is now physically an adult, while still mentally and emotionally a pre-teen. The mutants follow the ThunderCats to Third Earth as well. Lion-O’s spirit guide Jedi Jaga shows up to explain to Lion-O what’s going on; he remembers and frees the other ThunderCats, who kick some mutant butt. As Jaga conveniently explained, some aging is possible in the suspended animation pods, but the only one of them that aged was Lion-O. The others looks the same. This makes things especially awkward when Cheetara comments that Lion-O is hot now. Before getting into the pods she was at least ten years older than him. All of the ThunderCats were in suspended animation for a very long time while they traveled to Third Earth, but only Lion-O physically aged. None of them appear to have aged mentally. So Panthro, Cheetara, Tygra, and Snarf are adults with the minds of adults, WilyKit and WilyKat are still children with the minds of children, and Lion-O is an adult with the mind of a child. This is more difficult to process than naked ThunderCats. But the episode is over now, so you can spend the time until next Saturday morning trying to wrap your brain around it.

One thing that sticks out immediately when watching the ThunderCats is what other media influenced it. As I’ve not so subtly alluded to, Star Wars was an obvious influence. Lion-O is Luke and everything about Jaga screams Obi-Wan, from his early sacrifice to appearing in non-corporeal form to act as a guide. Superman appears to have also been a reference, with the ThunderCats escaping a dying planet, becoming last of their kind, and landing on Earth. Lion-O is even referred to as a “superhero” after their fight with the mutants. Anything else? Uh…Island of Dr. Moreau? Maybe not, but I feel confident about Star Wars and Superman.

What’s Good About the Show? I think the theme song is legitimately good. “ThunderCats Ho!” is one of the most iconic catchphrases in cartoon history. The animation could be a lot worse. It’s pretty solid.

Is this Rewatchable? Streaming services certainly don’t make it easy! It’s not as bad as I thought. When I started rewatching for the article, my answer was definitely no, but I think that’s because I mostly had visions of naked ThunderCats dancing in my head. Visions of sugar plums dancing means you’re ready for Christmas. Visions of naked ThunderCats means you’re ready to get put on a list somewhere. Once you get past that scene though it’s not awful. It’s not like watching Tiny Toons or The Tick where the quality is evident even though you’re no longer technically the target demographic, but taken as a show for children this holds up. I’d show this to my nieces and nephews, and then get end up on that list I mentioned.

What shows would you be interested in seeing covered for Is This Rewatchable? Let us know in the comments or on Twitter.

Interested in checking out The ThunderCats series? You can get the pilot by clicking on the image.