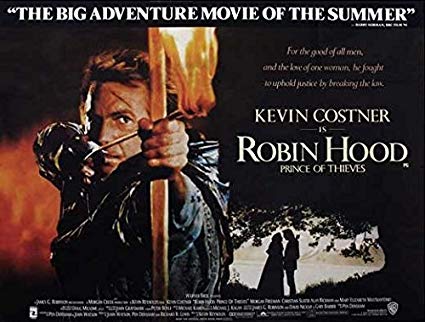 It’s time for another installment of VHS tapes that my family owned. Outside of the clamshell Disney VHS tapes my mom dutifully purchased, our collection, if you could call it that, had no rhyme or reason. It consisted of whatever my aunt had taped for us off of MTV and HBO, and then a series of wildcards, like a Suicide Squad of tapes, none of which were Suicide Squad. For the most part, they weren’t even movies we had seen in theaters, just presumably something one of us had seen on the shelf and expressed enough desire for that it made an impression on Mom. 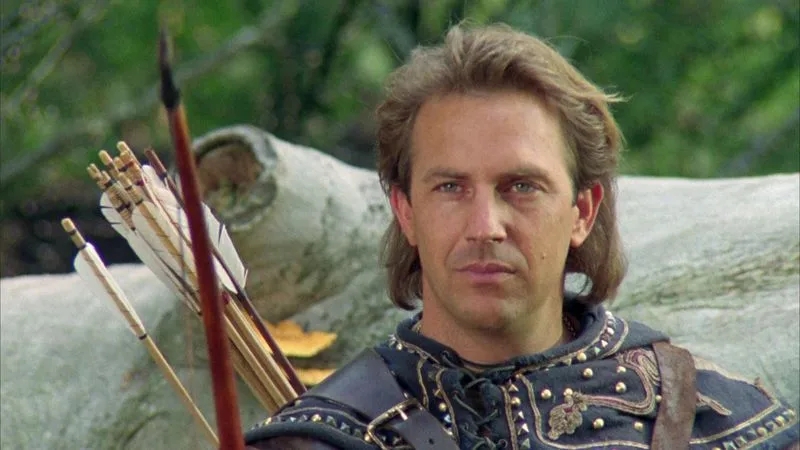 Robin Hood: Prince of Thieves must have been the work of my older sister. In 1991, the year it came out, Sarah was 13, and I’m assuming that the combination of Bryan Adams single + Christian Slater = on-board teen girl. I’ll get into it in more depth in the future, but Bryan Adams was the soundtrack king in the late 1980s and early 1990s. He was the Michael Jordan of montage laden ballads. At the time Michael Jordan was still the Michael Jordan of basketball, of course. Bryan Adams was the Canadian ace up the studio heads’ sleeves, good for a monster opening and plenty of MTV airplay. His contribution to Robin Hood was an all timer, but more on that later.

Everybody is familiar with Robin Hood, but for those who never saw Prince of Thieves, it featured all the classic characters but swap out the sexy cartoon fox and insert a very much feeling himself Kevin Costner. Costner was riding such a high in 1991 coming off of Field of Dreams and Dances With Wolves that he didn’t even attempt a British accent, even though it was actually setting appropriate for once, instead of just attempting to fake gravitas. Even Christian Slater did a British accent, but Kevin wouldn’t be cowed into it. The film also featured Morgan Freeman as Costner’s Moorish companion and fellow former inhabitant of an Ayyubid prison in Jerusalem. This plot point is a result of the Crusades being tacked onto the beginning of the film, mostly as Oscar filler I’d assume but also possibly because they couldn’t come up with any other way of working a black guy into the movie? This was my introduction to Morgan Freeman and he quickly became a favorite up until recently, when he and every other actor we once enjoyed was revealed to be a scumbag. In any event, he was good in this.

Once Robin gets to town all the usual pieces of the Robin Hood tale fall into place, including Friar Tuck, Little John, Slater as Will Scarlett, Michael Wincott aka Top Dollar from The Crow as Guy of Gisborne, and international treasure Alan Rickman as the Sheriff of Nottingham. Rickman hams it up like crazy, and gets all of the best lines. This was also my introduction to Rickman since I’d been too young to see Die Hard, and he obviously also became a favorite. He unfortunately passed somewhat recently, and thankfully untainted by scandal (apart from appearing in the insane mess Love Actually).

There’s not much interesting to say about the actual movie, except for Rickman’s threat to “cut your heart out with a spoon” is an all time classic line, and Kevin Costner’s American accent is insane. I assume somewhere on the Internet there’s an interview explaining that choice, so by all means head there after reading this to find out why. I prefer to maintain my own theories. My expectation, which is probably close to the truth, is that Kevin Costner’s British accent sucks. Rather than embarrass himself, Costner decided just to speak normally, and nobody was going to tell the guy who just won every Oscar for Dances With Wolves that he couldn’t do that.

And then there was “(Everything I Do) I Do It for You.” Bryan Adams’ signature song from Robin Hood was a massive hit. To date, the song has the longest unbroken streak at #1 on the UK singles charts, spending 16 consecutive weeks there. It was #1 for seven weeks in the United States, and Billboard’s #1 song for 1991. It also won the 1992 Grammy for Best Record and was nominated for the Oscar for Best Song, losing to Beauty and the Beast (another tape we owned).

I don’t know for certain how Robin Hood: Prince of Thieves entered our collection. I do know that we memorized every line of that “should have been forgettable” movie. I studied film in college. I’ve read more than 20 film theory books, watched hundreds of movies considered the best of their times. Yet when I think of movies from my past, invariably Robin Hood pops up in my brain before any of these classics. If you somehow missed Robin Hood: Prince of Thieves, it’s worth watching once, for Rickman at the very least. It’s been on and off of streaming services recently, so try to catch it when you can, or ask my mom for the VHS. She probably still has it somewhere.

Did you see Robin Hood: Prince of Thieves? It’s certainly a movie, huh? Let us know in the comments or on Twitter.