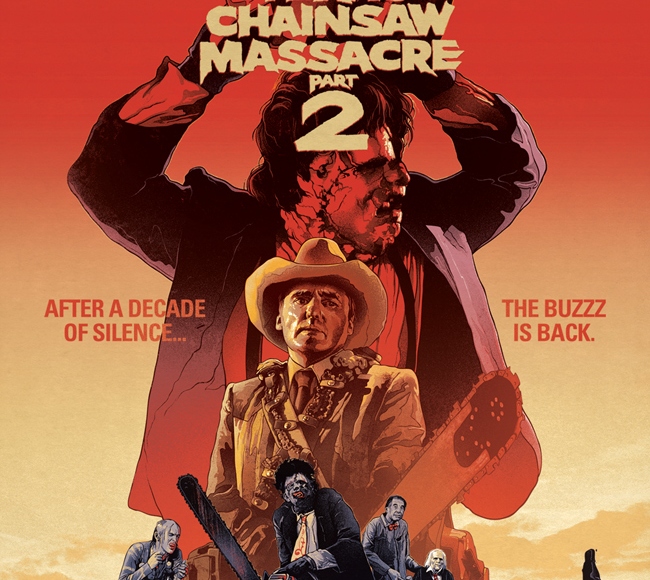 Today’s guest post is brought to you by Greg Orme- Ed.

“…The Texas Chainsaw Massacre has not stopped. It haunts Texas. It seems to have no end.”

In 1974, Tobe Hooper released his masterpiece The Texas Chain Saw Massacre into the world. Allegedly funded by the Mafia attempting to launder funds they’d made off of Deep Throat, the film was brutal, nightmarish, and to the surprise of many, minimally bloody.

Twelve years later, after a string of what would later be considered cult classics and also Poltergeist (which he may not have entirely directed), Hooper returned with a sequel that would divide critics and fans alike. Written by L.M. Kit Carson just two years after he co-wrote Wim Wenders’ Paris, Texas, it is in many ways very much the opposite of its predecessor. Gone is the slaughterhouse score of the original. In its place, a campy and dramatic synth score. Where there was once implied carnage, there is now over-the-top and gratuitous violence. Hell, we’re even treated to a bonkers chainsaw fight.

The plot is relatively simple: Twelve years after the events of the original, the members of the cannibalistic Sawyer family kidnap Stretch (Caroline Williams), a local DJ they’ve become infatuated with. Meanwhile, local Texas Marshal Lieutenant Lefty Enright (Dennis Hopper) is closing in, seeking revenge for the murder of his nephew. Along the way we get a complete retooling of the Sawyer family, complete with much more back story and personality. Alongside the iconic Leatherface (Bill Johnson), we have Chop-Top (Bill Moseley), a Vietnam vet with a metal plate in his head, Drayton (Jim Siedow), who we meet winning a local chili contest (the secret ingredient is people!), and Grandpa (Ken Evert) the ancient patriarch who likes blood.

Look, I love the original, but this one is my favorite. There is nothing else that quite feels like this movie, no matter how hard Rob Zombie tries to replicate its charms. As upsetting as the movie gets, and oh boy does it get upsetting, the cartoonish nature of it all keeps it from getting too overwhelming. Also, did I mention Dennis Hopper gets into a chainsaw fight? If that one sentence doesn’t sell you, I don’t know what will.

(Speaking of Dennis Hopper, he hated this movie. At the time of its release, he claimed it was the worst movie he’d ever done, which is an odd take for someone who appeared in O.C and Stiggs. Not every movie gets to be Blue Velvet, but come on. Chainsaw fight. And all things considered, he could have appeared in Leatherface four years later, a movie I know I’ve seen but can barely recall. This movie might as well be Citizen Kane compared to that 85 minute nap.)

I’d be a damned fool if I didn’t mention Tom Savini’s makeup effects here. He was especially proud of the prosthetics he designed for Grandpa, and he should be. Grandpa doesn’t look human as much as he looks like the faint idea of what used to be human. The character that is skinned alive (like I said, this movie is gruesome) is also very believable. He also constructed a human skin mask, which is horrific and it shows up a lot.

Browsing the IMDB user reviews, it seems like a lot of people don’t share my enthusiasm for this movie. They seem to think it should be more in line with the first one, which I very much disagree with. Recapturing the tone of the original would be an impossible task, and I’m glad they made this movie its very own thing. They’d fall into the trap of trying to capture the feeling of the other slasher movies that were hitting in the third movie, and that movie’s a boring mess where no one even makes chili out of people. Ultimately, these reviews prove my theory that other people’s tastes are bad and mine is very good.

Should I show this to my five-year old?

Great question! I’ll answer your question with a few questions of my own. How does your five-year old feel about human skin masks? Is your child a Dennis Hopper fan? What does your child think about tops of heads being chainsawed off? If they’re not on board with any of that, I’d probably wait until they’re at least eight and talk to them again and see where you’re both at.

I think I’ve made it pretty clear that I love this movie. As far as I’m concerned this movie has plenty to offer for fans of macabre humor and campy gore. It’s a fun movie to watch with your family, assuming that your family is a bunch of rural cannibals that make their own chili. It’s no Academy Award winner (Platoon won and this was somehow skipped over in every category) but I think you should watch it. It’s not perfect and I would have given Dennis Hopper a bit more to do, but we can’t always get what we want.