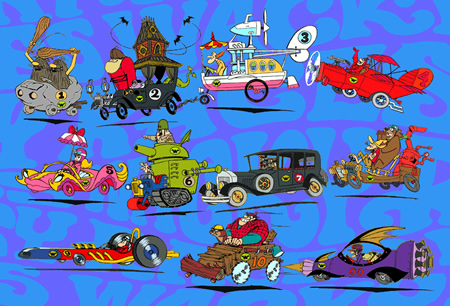 Outside of The Flintstones Hanna Barbera cartoons have received a raw deal from me and other old dorks who still sing the praises of childhood favorites like Tiny Toon Adventures and Batman: The Animated Series while shows like The Jetsons and Yogi Bear aren’t forgotten exactly but they’re never mentioned when people are listing their favorites. Others, like Space Ghost and Johnny Quest, are associated with Cartoon Network, while the rest of the Hanna Barbera oeuvre exists as vague memories. I loved Captain Caveman and watched a bunch it but I can’t recount the plot of a single episode. This is also true for the subject of today’s article Wacky Races, apart from loving it. What was my favorite episode? I have no idea. I can tell you that in it the bad guys probably tried to cheat to win the race but ultimately one of the good guys prevailed, because that’s what happened in every episode of Wacky Races.

I’m writing about Wacky Races today because to date I haven’t covered anything related to Hanna Barbera, and to be completely honest I don’t expect to cover much more, so this is representative of most of the hours I spent watching and retaining only the ghost of a memory of these shows. This is a fairly overwrought intro for what is going to be a listicle, so let’s move on now to my rankings of the racers and vehicles from Wacky Races. The original show has 11 competitors, which I will slot from worst to best. These rankings are based completely on my personal biases, yet they are also 100% accurate.

#11 Red Max in the Crimson Haybaler

I would like to meet the child whose favorite Wacky Races character was Red Max, only so I could say I spoke to the most boring kid in the world. I bet your favorite GI Joe guys were the Greenshirts and you advocated for purple stuff over Sunny D every time. Red Max was the Red Baron if you removed everything cool from the WWI flying ace and only left the German accent. He had a plane which is excellent in theory when racing against cars but his plane barely flew, and since this isn’t a Deathrace the presence of a machine gun doesn’t count for much. Congratulations Red Max. You are the worst Wacky Racer.

#10 Professor Pat Pending in the Convert-a-Car

And you’re the second worst, egghead! When you’re competing in a race with cavemen, bears, dogs, and monsters it’s hard for a scientist to stand out. Pat Pending’s car did some cool stuff, but on the whole he was a filler character. If you were going to choose a racer to compete with and you wanted a car with a bunch of gadgets, why would you ever choose Pat Pending over Dick Dastardly? It’s just not happening.

#9 Peter Perfect in the Turbo Terrific 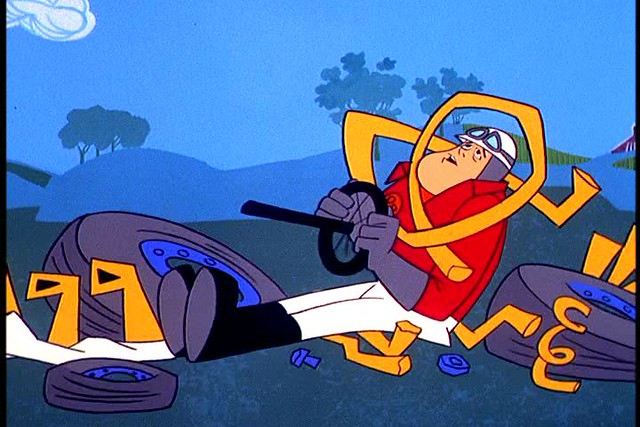 BOOORING. You’re a dang Disney Prince, square jaw. Your name should have been Bobby Bland instead. Peter’s entire thing is he’s handsome and he loves Penelope Pitstop, and they’re obviously meant to be together because they both have alliterative P names and they’re both hot. Hot people are supposed to be with other hot people, it was in the 10 Commandments. The Turbo Terrific is a pretty sweet dragster but in a race like this it needs some additional tricks. Sorry Pete, you’re too basic to win this ranking.

#8 Penelope Pitstop in the Compact Pussycat

Full disclosure, I didn’t like girl characters much as a child. I was a little heteronormative boy who liked boy things, so Penelope was at an immediate disadvantage in these rankings. She didn’t help her case much by her primary personality trait being that she’s obsessed with makeup and beauty products. She’s as basic as Peter, and I’ll be damned if a pretty person makes it to the top of these rankings.

This is one of many entrants in Wacky Races that attempts to benefit from an association with a much more famous property. In this instance it is painfully obvious that Blubber Bear is a lesser version of Yogi Bear, incorporating the same green color scheme as Yogi. Further cementing this association, in The New Yogi Bear Show one of the new characters introduced was named Blubber Bear, but it’s supposed to be a completely different character than this version. While I get that Hanna Barbera created a lot of cartoons over the course of many years, there were a lot of unused B-words out there when it came time to name the new bear. How about Bingo Bear? Wait, what the heck is this?

Okay naming characters is difficult. My point is there are other words out there. As for Lazy Luke and The Arkansas Chug-a-Lug, while I grew up in the sticks I didn’t go to hick schools until I switched to public school in the 8th grade, so there was still a novelty to me in rural stereotypes. I didn’t love this like I did Hillbilly Jim in the WWF, but I also didn’t hate it with the ferocity of 1000 suns like I did Mama’s Family, so #7 seems like a good landing spot.

There’s that benefit by association I was just talking about. When I was a child I was obsessed with myths and legends, subject matter that remains a major interest of mine to this day. This meant that I was into tall tales, and perhaps the best known tall tale was that of Paul Bunyan. Rufus Ruffcut earned this ranking almost entirely due to his status as a massive lumberjack. Even if personality-wise he’s no Paul, it’s difficult not to associate him with the most famous lumberjack of all. Rufus also has the best sidekick in this entire show, a beaver named Sawtooth! I’m taking beaver over dog and bear when I’m picking a sidekick 10 times out of 10.

#5 The Anthill Mob in the Bulletproof Bomb

The Anthill Mob lands in the #5 spot mostly because of my love for cartoon gangsters doing Edward G. Robinson impressions. The Scarface impression is a cartoon standard, instantly recognizable to anybody who watched any version of Looney Tunes. He even shows up as a ventriloquist’s dummy villain in Batman. I studied film in college and went on to watch the Jimmy Cagney and Edward G. Robinson gangster movies that served as the basis for these characters, but it says a lot that cartoons managed to create these tropes that could stand on their own as references for children who had no concept of the source material.

I also enjoyed the Anthill Mob because there were so many of them crammed into the car, like clowns in a circus cartoon. I never picked up on the reference to the Seven Dwarfs even though there was apparently an episode where they made it explicit by dressing the Mob us as the Dwarfs (weird. I just typed Dwarves before editing it. Shouldn’t it have been Dwarves this entire time? Somebody get Disney on the phone and let them know).

#4 Dick Dastardly and Muttley in The Mean Machine

Dick Dastardly and Muttley mostly earn this spot because they were the breakout stars of the show. Pushing them down towards the bottom would be like ranking 1980s wrestlers and not including Hulk Hogan in the top five, or Star Wars villains and listing Darth Vader below Greedo. Even if you don’t like them personally (and I really hate Hogan now after finding out what kind of person he is, while recognizing as a child that he was a crappy technical wrestler) you have to credit them for the contributions that they made to the art form. Dastardly and Muttley were the most three dimensional characters, and love them or hate them you were directed towards having an opinion. Also Muttley was a lovable jerk, AND there’s a Long Island cover band named after their vehicle.

#3 Sergeant Blast and Private Meekley in The Army Surplus Special 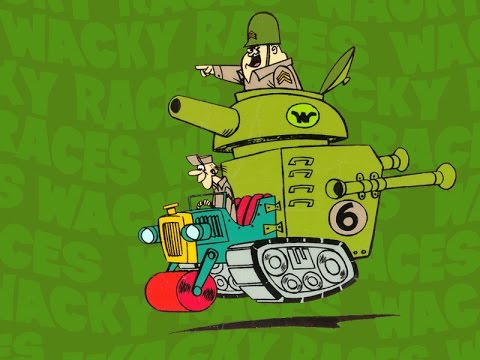 As an adult I am not a cheerleader for the military. I’m not going to get too deeply into politics because this isn’t the purpose of the website, so I’ll just say that I understand why maintaining a military is necessary but I believe it’s something you should have but seldom use, like cloth napkins or an undergraduate degree in media studies. When I was a kid I was all about the military because I loved shows like GI Joe. Hey, it’s almost as if the purpose of shows like that was to condition children to reflexively love the military and…I’m going to stop now before I ruin my childhood. All of that is to say that Blast and Meekley were probably going to rank pretty high no matter what, but they’re helped considerably by having one of the coolest vehicles on the show. The Surplus Special was exactly what it sounded like, a hodgepodge of the best parts of an assortment of military vehicles. To top it off they stuck a steamroller on the front, because why not? It’s a cool looking vehicle that could do a lot of cool stuff. Another nice note to this team is that Blast and Meekley were written to undercut some of the things that GI Joe later championed. Like most of the characters in the show they were written as goofballs.

#2 The Gruesome Twosome in The Creepy Coupe

Every aspect of this team is a reference to a more famous predecessor. Big Gruesome and Little Gruesome’s voices were based on Boris Karloff and Peter Lorre. Their vehicle is a combination of the Addams Family’s Packard and the Munster Koach. The Creepy Coupe even featured a dragon, a direct reference to Spot from The Munsters. There was nothing original about the Gruesome Twosome and I think that’s great! All of these touches were things that we loved about spooky TV. Put them together and you’ve got derivative magic.

Peter Lorre might be an even more famous impression in cartoons than Edward G. Robinson. Generations of children grew up instantly recognizing the impression while almost none of them knew the actor it was based upon.

#1 The Slag Brothers in The Bouldermobile 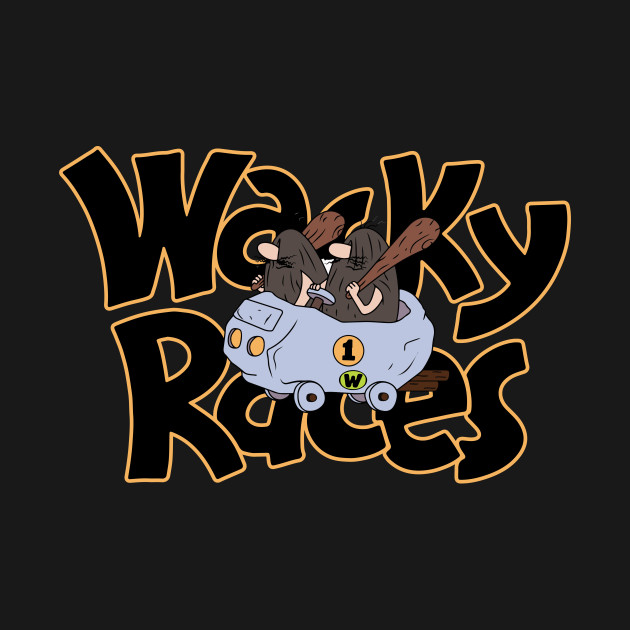 This is the point where it becomes very obvious that this entire exercise is arbitrary and biased. Would most people rank The Slag Brothers and The Bouldermobile as the best team and vehicle in Wacky Races? Probably not, yet this ranking is 100% accurate, so what are you going to do? It is what it is. You’re probably going to be even more annoyed with this ranking when I reveal right now that going into this I thought that one of the Slag Brothers was Captain Caveman. Nope! Rock and Gravel are their names. The obviously served as the basis for Captain Caveman but he didn’t exist yet. Couple that with the revelation I ranked The Slag Brothers #1 because Captain Caveman was my favorite Hanna Barbera show and character, and this entire list is a fraud! Oh relax, this website is free to read and The Slag Brothers were still pretty cool. They could call upon dinosaurs to help them! This isn’t historically accurate of course unless you’re a Young Earth Creationist, but c’mon every kid loves dinosaurs. Hairy pavement with clubs who speak in monosyllables are great, dinosaurs are great, and if this was actually Captain Caveman that would be great. The Slag Brothers are clearly the best racers in Wacky Races.

What was your favorite team in Wacky Races and why was it The Slag Brothers? Let us know in the comments or on Twitter.

80s Baby has a Patreon! Become a Patron by clicking here.

If you’re into Funko, there are a whole bunch of Wacky Races related Funkos available (most out of print and expensive). 80s Baby may receive a commission.