On January 15, 1990 I turned four-and-a-half years old.  That same day They Might Be Giants released their third studio album, Flood.  Unless you are (a) much older than I am or (b) significantly cooler than me you probably discovered Flood about a year later when “Istanbul (Not Constantinople)” and “Particle Man” appeared on Tiny Toon Adventures.  As I said, I was only four-and-a-half when Flood came out and not very cool for … well I’m still not very cool so TMBG didn’t fully enter my world until high school.  Now, they are unambiguously my favorite band and if you ask me about the IFC I will tell you, “Oh, I don’t know. You must be thinking of some other band”. 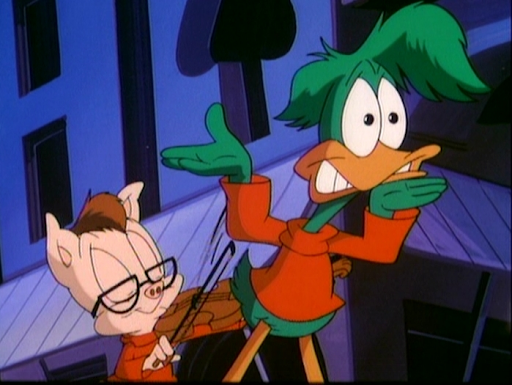 The album is celebrating its 30th birthday today in case that wasn’t obvious before.  From start to finish it is a very polished version of early They Might Be Giants. Flood is from the old duo-and-a-drum-machine days, with a full band being added a few years later for the Apollo 18 tour and subsequent albums.  Not having Dan, Dan, and Dan/Marty meant that when The Johns appeared on The Tonight Show to promote the album, they could do something like this:

Personally, this is my favorite version of “Birdhouse In Your Soul” and I would love to see them do an official studio release with this arrangement.  Or go full “Weird Al” and do a big band arrangement tour. A girl can dream and who knows what 2020 holds. (Spoiler: It’s a sold out tour celebrating Flood.)

Like most suburban youth, I had a job when I was in high school.  My job was scooping ice cream at our local non-chain shop, Juicy Lucy.  Yes, I now know that is the name of a Minneapolis cheeseburger (spelled JUCY, apparently) and yes it is a very weird name for an ice cream shop but I didn’t name it.  The best part of working there, aside from “free” ice cream was that I spent every shift with my high school BFF, Jess.  We had choreographed moves to “Particle Man,” like full on, interactive moves.  We’d be mid-scoop and have to duck down to “live in a garbage can” and, yes, it absolutely translated to more tips and our customers loved it and we loved it.  When you’re 15 you have no shame and you definitely will point to your wrist to indicate a “millennium hand an eon hand” on your watch if it will make the divorced dad laugh and throw you a $4 tip.  It was probably a good indication of what the gig economy was going to be like for my peers.

Speaking of the depressing state of the world, just go ahead and listen to “Your Racist Friend” if you haven’t in a while. Go ahead, I’ll wait.

RIGHT?  HOW ON POINT IS THAT SONG FOR TODAY’S POLITICAL CLIMATE?  “Can’t shake the devil’s hand and say you’re only kidding” is a genius turn of phrase.

Back to the good stuff, though.  You’re not here to be reminded of the garbage of the real world but to bask in the gentle glow of the TV static of nostalgia.  Like this!

Yes, this is Clarissa Explains it All and yes, that is a pretty boss Flood poster hanging up in her room.  Apparently, Melissa Joan Hart was a TMBG fan and the character was built out around her own weirdo kid tastes.  Yet another reason why Clarissa Darling remains aspirational to me, even though I am 20 years older than Clarissa was when the show started.

They Might Be Giants has been a weird through-line for me since I was a kid up until I fully embraced them as my favorite band.  Sure, there are obvious things like the videos on Tiny Toons and the aforementioned Clarissa set dressing.  But my favorite “Weird Al” song is a TMBG pastiche.  I didn’t know it at the time but this absurd Dunkin Donuts commercial that my sister (HI SHANO!) and I loved was part of an ad campaign featuring songs written by TMBG.  The Johns collaborated with the Brothers Chaps for a bunch of Homestar Runner content.  Now, I’ve seen them live more than a few times, including on the 20th anniversary tour for Flood (Thanks, Adam!!).  I even own a Blue Canary in the Outlet nightlight but it is not by the light switch as that is a physical impossibility in our apartment.

Flood was certified platinum in 2009, just shy of its 20th birthday.  It is a testament to the staying power of They Might Be Giants that Flood continues to be one of their most popular albums and is almost certainly most people’s introduction to the band itself.  In my humble opinion it is a “perfect album” – one with no skippable tracks. I love Flood.  John (HI JOHN!) bought me a very fancy 180g vinyl version for Christmas one year (along with Factory Showroom, John Henry, and Apollo 18).  Flood is, today, both nostalgia-infused and absurdly current.  TMBG makes timeless and timely music and have been doing so for longer than I have been alive.  If you’ve never listened to TMBG, give Flood a spin today.  Or revisit the album if it’s been a while since you sat with it.  I’m certain you’ll love it. And if you don’t enjoy it, well, that’s nobody’s business but the Turks’.

Amy Bilancini runs and lawyers. You can’t watch her lawyer, but you can follow her running progress on Twitter and Instagram, and her speaking on behalf of our dumb cats here.

Hey guess what?! 80s Baby has a Patreon! Check it out here.

Own Flood below! 80s Baby may receive a commission.