Everybody knows that 30 years ago today a little show called The Super Mario Brothers Super Show introduced the world to two brothers from Brooklyn employed in the plumbing trade. Those brothers took their talents to the Mushroom Kingdom to rescue a princess named Peach (or Toadstool, depending). The show was based on a little known video game released by a playing card company called Nintendo that decided to throw its hat into the video game ring. It’s possible that the game featuring the brothers Mario and Luigi would have been forgotten entirely had DIC Enterprises and Haim Saban not backed a television show that brought the legend of the brothers Mario to the small screen, and by extension to the world at large. 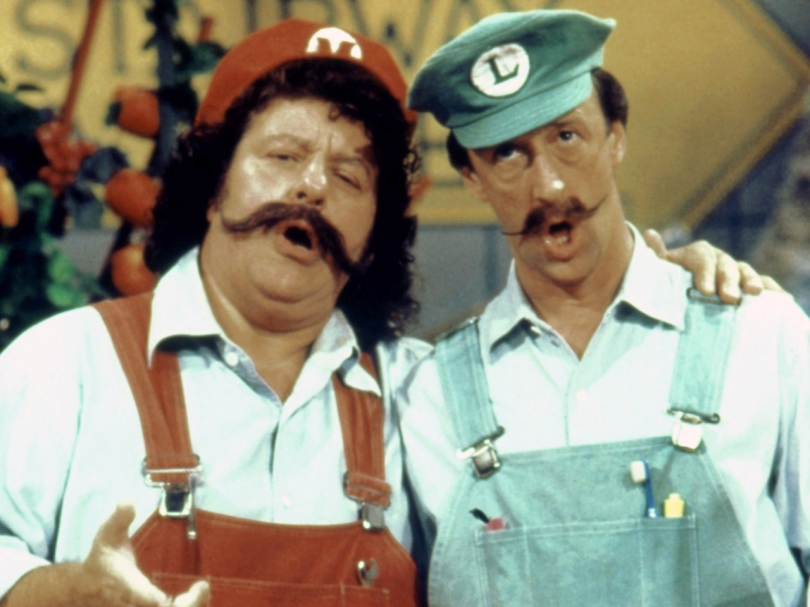 If you aren’t familiar with the Mario Brothers, and let’s be honest, if you didn’t watch this television show I don’t know how you possibly could be, they are Mario Mario (played by Captain Lou Albano) and Luigi Mario (Danny Wells). The Marios run a plumbing business in Brooklyn, and during each week’s live action segments the Marios are visited at their shop. The guest in the very first episode is actress Nicole Eggert, playing herself. Nicole has a clog at her home but she’s in a hurry to get to a party and she’s hoping that the Marios are able to fix it. I hate to spoil it for you, but not only do the Marios not fix the clog, they make things worse for Nicole! She gets splashed with water and covered in soot, but that’s okay because she’s going to a sloppy party where the sloppiest person wins! The Marios respond to this news by covering Nicole in cake.

The live segment with Eggert answers a very important question that was on all of our minds: do Mario and Luigi live in our universe? It seems pretty obvious that the answer is yes. The Marios live in Brooklyn, are employed as plumbers, Nicole Eggert of Charles in Charge and Baywatch fame lives on the other side of their mirror, and at some point each day they throw to a cartoon version of their lives that takes place in the Mushroom Kingdom. All of this checks out.

In the middle of their interaction with Nicole the Marios segue to that cartoon, and for the first one out some very strange choices were made. If you aren’t familiar with all of the inhabitants of the video game world of the Mario Brothers and I don’t know why you would be since they weren’t particularly popular games, this particular cartoon features Mario, Luigi, Princess Toadstool, and Toad on the side of the good guys, and King Koopa, Flurries, Bob-Ombs, and Albatrosses on the side of the bad guys. Birdo is neutral here; she’s just looking for her kid. Odd choice #1: The characters, setting, and music were taken from Super Mario Brothers 2. Some people love Super Mario Brothers 2 and consider it their favorite game of the 8 bit console series; I happen to be one of those people. But to go to the least popular of the three games (Original Mario Brothers excepted) to populate the first cartoon is a very strange thing to do. Odd choice #2 (even though I get why they did it): King Koopa isn’t in Super Mario Brothers 2. The main bad guy is a frog named Wart. Obviously the decision to make Koopa the big bad of this universe and place all of the ancillary bad guys under him was the logical thing to do, but I don’t like that we’re supposed to just accept that these Flurries and Albatrosses were totally fine shifting their allegiances to Koopa from Wart and following him blindly? There wasn’t a single ambitious Bob-Omb or Beezo that wanted to make a play for the crown? I’m not sure I buy that. Just to wrap up the plot of the particular cartoon Birdo grabs Toad thinking that Toad is her baby. Mario and the gang uncover Birdo’s actual baby by shooting some fireballs and they trade it for Toad. Birdo helps them foil Koopa’s plans.

Before we go, just some stray thoughts on the Super Mario Brothers Super Show:

Captain Lou Albano is basically the only actor involved in this show who isn’t Canadian. I don’t know if that has deeper meaning, but I’m just tossing that out there in case you have an abiding love for Canadian voice actors. Also, kids who grew up in the 1980s probably know Captain Lou as the colorful WWF manager and father of Cindy Lauper in her “Girls Just Want to Have Fun” video, in addition to his role as Mario. This episode also featured a plug for the Legend of Zelda cartoon, and what I’m about to type next might be even more controversial than pretending Nintendo and the Mario Brothers aren’t one of the biggest properties on Earth: I have never cared about anything Zelda related. None of it. Not the original, not Majora’s Mask, not Breath of the Wild, not The Wand of Gamelon for Philips CD-i. I guess you could say that none of the Zelda titles possess a link to the past for me.

One more thing. My wife did not watch this show growing up, yet she knows every word to the closing song, “Do the Mario.” I find this very strange.

Were you a fan of The Super Mario Brothers Super Show? Who was your favorite guest? Let us know in the comments or on Twitter.

No Amazon link today because the entire series is available on Netflix. I guess if this inspires you to subscribe to Netflix you could Venmo me a couple bucks for the heads up? Or not, of course.