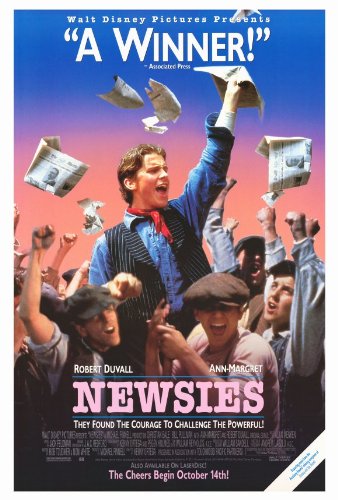 The next movie in my series of videocassettes that we owned for some reason is Newsies. I only know Newsies as a frequent resident of our VCR. I don’t remember its theatrical run at all, or how we heard about the movie. All I know is that one day in 1992 it appeared in our home, and for the next year or so we watched it at least once a week. Looking at the numbers I’m not the only one who didn’t remember its theatrical run. Newsies bombed hard. 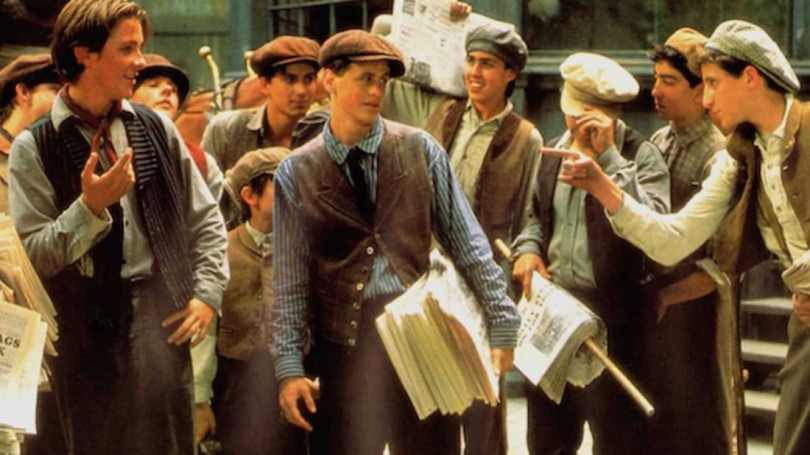 Younger readers may only know Newsies from its turn as a Broadway abomination, but we met Jack, Crutchy, Mush, David, Les, Racetrack, Spot Collins and the rest on a Hollywood soundstage version of turn of the century New York City. Let me make something clear from the start: Newsies is not a good movie. I don’t know a whole lot about musicals, but I’m going to take a stab in the dark and say that it’s also not a good musical. None of that changes the fact that it’s my favorite musical, and that 27 years later I will still watch the movie version on occasion.

Let’s begin with the songs, and the biggest gripe I have with the Broadway version of the musical. I know every song in Newsies by heart. I don’t remember the names or faces of half of the people from my graduating high school class, but I will die with the lyrics to “King of New York” on my lips. My sisters and I never attempted to stage Newsies at home (unlike Really Rosie, which we did hallway performances of), but I have no doubt we could recreate 85% of the dialogue and all of the songs without a refresher viewing. “Carrying the Banner,” “Seize the Day,” top 40 hits in our household. The stage version was recently available on Netflix, and I turned it off during the opening number, after complaining to my wife through most of it. The thing that upset me so much was that for seemingly no reason at all, they changed the lyrics to the songs. I’m not talking about writing new songs, which would have been fine if unnecessary. They changed the lyrics to existing songs. It also wasn’t an update, since 1) it’s a period movie and 2) it’s a movie from the early 90s, not a musical from the 40s. It’s not as if they had to scrub antiquated slurs and references to the Fuhrer or anything. They just ruined the songs for no reason. Forget Broadway Newsies. There’s one true version of the Newsies musical, and it’s got Christian Bale. 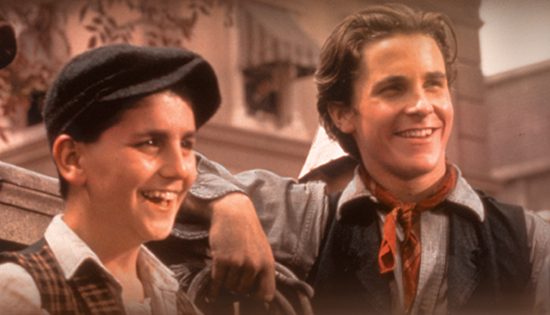 The plot shouldn’t be terribly interesting to children, as they are telling the story of the newsboys strike against William Randolph Hearst and Joseph Pulitzer’s newspapers, and the history of labor unions won’t make the list of many 10 year olds’ interests. The songs and likable characters make it work though, and for what it’s worth, my sister says that Newsies inspired her to get involved with organizing when she reached adulthood, so they got one, at least. 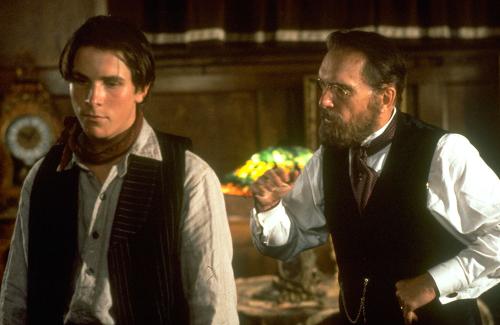 Aside from the songs, Newsies is notable for a fairly decent, or at least interesting, cast. Robert Duvall appears as Joseph Pulitzer, letting the costume do much of the acting. The star is Christian Bale, soon to become a full on teen heartthrob in Little Women. It also features Doogie Howser’s next door neighbor Max Casella, Ann Margaret, the kid who would own the Minnesota Twins two years later in Little Big League as Les, the Bash Brother who wasn’t later Foggy Nelson but did recently marry Idina Manzel, and Mr. Mushnick from Little Shop of Horrors as Mr. “Weasel.” Oh and Bill Pullman, as handsome Bill Pullman.

The original Newsies VHS is still in my younger sister’s possession. I later bought it on DVD and she permanently borrowed it, but my friend Patrick picked up another copy for me a couple of years ago. If you’ve never seen the movie, well, open the gates and seize the day. Don’t be afraid and don’t delay, even if you’ve seen the Broadway version. Hopefully the copy you get will include the pre-film anti-drug PSA featuring many of the cast members wearing early 1990s hip hop clothing.

How big of a fan of Newsies were you? Let us know in the comments or on Twitter.

If you’re interested in renting or owning Newsies for yourself and sending a few bucks our way, use the link below.