A couple weeks ago I bought a bunch of packs of non-sports trading cards from Economy Candy, and it reminded me of another thing that used to come in packs that I spent way too much time and energy and my parents’ money on as a child: Panini stickers.

The Panini Group is an Italian company that was formed in 1961 and began distributing stickers and sticker albums in 1970, but I primarily knew them as the jerks that LEFT SKELETOR OUT OF YET ANOTHER PACK OF MASTERS OF THE UNIVERSE STICKERS WHAT THE HELL PANINI NOBODY NEEDS ANOTHER ORKO.

Panini’s business practices were very smart. Why produce something like coloring books or picture books that require one purchase, when you can hook kids into going back repeatedly to get sticker packs until they get what they need to fill the book? Plus, even kids who are so bereft of talent and hand eye coordination that they can’t color an image should be able to place stickers in a book (should is doing a lot of heavy lifting in that sentence).

There isn’t a grift out there that I wasn’t a ready made mark for, so I of course loved Panini stickers. If there’s a collector gene, I definitely have it and my sisters were spared, although with these they got into it as well, mostly because the stickers and sticker albums were pretty cheap so they made for easy gifts and stocking stuffers.

Let’s jump in now and take a look at some of the sets from the 1980s that I was fond of. I will say that for me, interest in these didn’t last past the 80s. By double digits I cast aside such trivial pursuits and focused on serious collectibles with real value, like Topps baseball cards. And while I’m definitely not grabbing these from the register end cap at Target in 2019, it’s nice to know that Panini is still going strong and modern 7 year olds can also get suckered in.

Masters of the Universe 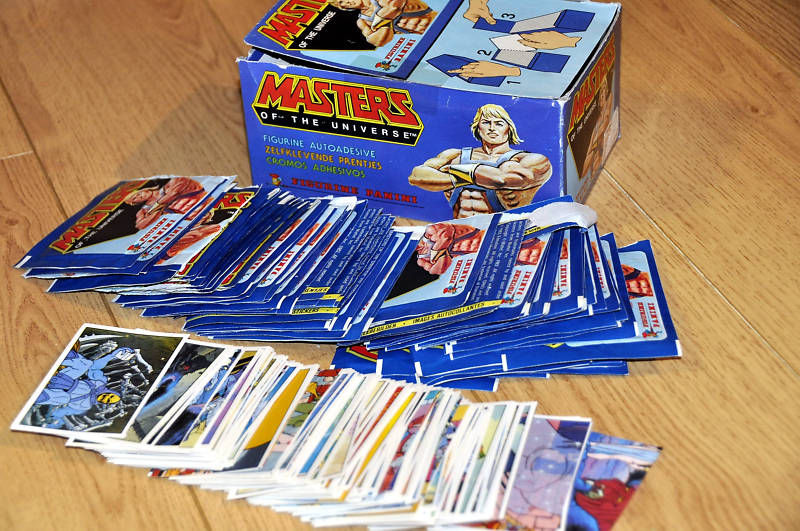 If you’ve seen the excellent episode of The Toys That Made Us about Masters of the Universe, you’re aware of the background that went into creating a cartoon to market the He-Man toy line. For most of the toys that were released in the 1980s, the corresponding Saturday morning cartoon was mostly an afterthought designed as 24 minutes of cheaply animated advertising. That’s not a novel observation given that it’s an established fact, but I will say that on the Mount Rushmore of cheap cartoon tie-ins, Masters of the Universe is the George Washington. I invested countless hours in watching the cartoon, buying and playing with the toys, getting the coloring books, and oh yeah, the reason I’m writing this right now, collecting the Panini stickers related to this product, and today I cannot recount the plot-line of a single episode of the cartoon. I can still tell you which action figures and play-sets I owned (Castle Grayskull and Snake Mountain. Snake Mountain was better). I can also tell you that Ram Man was my favorite dude.

You pushed him down and he sprung back up!

I’m afraid I won’t have very much to say about the stickers I’m highlighting here because for each it basically boils down to, “I liked this cartoon. I got the stickers and sticker book because I liked this cartoon.” So anyway, I got the He-Man stickers and sticker book because I liked this cartoon (sorry). One thing that the Panini albums had over coloring books is that everything looked more fully realized. Ram Man and He-Man looked like they looked in the cartoons, and you didn’t have to rely on your little sister to color Adam’s shirt pink like it was supposed to be, and it doesn’t matter if you want it to be green, Melissa, you’re ruining it! Mom! Nope, with the stickers, your hypothetical sister Melissa couldn’t screw it up and then a fight starts and sure you were actually stifling her creativity but she did it wrong!

Sad, disappointing cartoon you used to love, thy name is Thundercats. The year was 2016. A bright-eyed, bushy tailed, 35 year old John just discovered that Thundercats had been added to Amazon Prime. He put it on and in quick succession discovered two things 1) In the first episode the Thundercats were naked(?). Weird. and 2) this was a painfully bad cartoon. I didn’t even make it to the end of the first episode, and I was unsuccessful in turning the naked Thundercats into a decent stand up bit, so all in all, not a great experience.

While I wasn’t as crazy about the Thundercats as I was about He-Man, I did have all the action figures and I for sure had this sticker book. While I didn’t realize it at the time, the best thing about it is that it portrayed the characters as accurately as the cartoon did without the awful smooth jazz soundtrack, another thing I had forgotten until that fateful day in 2016.

At this point I was going to talk about the baseball sticker albums I definitely had and question why on Earth I both collected major league baseball cards and stickers but then I realized Topps put these out, which, c’mon Topps. What the hell, guys? If I’m going to double up, it shouldn’t be from the same company. This is child abuse.

The first cartoon series mentioned that was actually good! Of course that means I wasn’t nearly as into it as I was the other two. There were a lot of things to like about The Real Ghostbusters. The animation was solid, especially the depictions of the characters you already knew from the movies, and there were a wide variety of ghosts and monsters. This also made for a good transition to sticker form, at least in theory, since you could include things that might not be toy worthy but didn’t exist in other forms apart from on the show.

Discovering why the Ghostbusters cartoon was called The Real Ghostbusters had to have been in most people my age’s top five facts to pull out to try and blow people’s minds when they were in their teens and early 20s. Dropping knowledge like “There was a completely different British cartoon featuring a gorilla that debuted around the same time” was like Ethan Hawke replying “Mr. Brady died of AIDS” in Reality Bites. So hip and knowledgeable!

Also not Panini! Damn it. Gotta stick with the theme. It was great, though.

Gremlins is a wonderful movie and an incredible achievement in puppetry and practical effects that I now watch every Christmas, and my greatest enduring memory of it is something that will probably make my mom sad when she reads this. Sorry mom, it’s not your fault; I was a brat in this instance. On one of my age 7-9 birthdays I was playing upstairs in my parents’ room with my cousin when I told him I knew where my parents’ hid the presents. We went into my parents’ closet (the aforementioned hiding place) and I opened a couple of my gifts. Among them was a plush Gizmo doll. We got caught, of course, and my punishment was that I wasn’t allowed to open anything else during the remainder of my party. I had to wait until everybody left. Just one of those dumb kid things that never leaves your brain no matter what. I don’t remember anything about algebra, but I remember Gizmo. Somewhat less enduring is my memory of the Gremlins sticker book, though I know that I had it. Given my age at the time and how scary Gremlins was for a young child, most of my knowledge of Gremlins until the very late 80s was through things like the Gizmo doll, or this sticker book, or the Gremlins film novelizations, both of which I bought at Scholastic Book Fairs. In retrospect, it’s kind of weird that Gremlins was even made into a sticker book since the target audience for the stickers wasn’t old enough to see the film. I guess it worked out. I had it.

Postscript: I definitely had the Transformers one as well but it’s just here for the sake of photo variety.

Did you collect Panini sticker albums? What were some of your favorites? Let us know in the comments or on Twitter.