This is not going to be the only article covering the Teenage Mutant Ninja Turtles on this website, but it will probably be the only one written by me. I watched the original Ninja Turtles cartoon as a child, and owned a handful of the Kenner action figures. I saw the first movie, and I’m pretty sure I saw the second one (definitely not the third). Despite all this, I don’t share the Ninja Turtles obsession that most of my friends who grew up in the 90s have. I like the Turtles, but they were never as important to me as the Muppet Babies or WWF Superstars were.

Now that I’ve revealed I’m only a casual Ninja Turtles fan, hopefully you’ll stick around to check out some of the things my wife and I saw when we went to the Paley Center for Media in Midtown Manhattan, the worst part of NYC, to visit the Teenage Mutant Ninja Turtles Exhibit sponsored by Nickelodeon. As a resource, the Paley Center is amazing. In addition to the Turtles exhibit we spent some time in their library perusing video clips from their collection, and while the archive available to guests isn’t nearly as extensive as that which is accessible to their members and researchers, it’s a great way to spend a couple of hours if you take a trip to NYC. I recommend coming armed with a list of shows or clips to look up so that you can make the best use of the 90 minutes you’re permitted to browse the collection. Paley is suggested donation, so you can pay as much or as little as you like for admission.

The Ninja Turtles exhibit is small, consisting of only one room, and only provides a superficial overview of the history of the franchise, but it’s more than sufficient for the casual fan. I stopped caring about anything Turtles related following the first animated series and movies, so I really only cared about half the room, but if you stuck with the Turtles for their subsequent animated shows and movies, those are represented as well.

I’ve been a comic book reader since I was 12. I was a little too young for the TMNT books when they were first introduced, and in my corner of Ohio it was difficult to get anything that wasn’t major Marvel or DC titles, so I didn’t get into the Eastman and Laird comics. That said, I’ve always been fascinated with the origin of the franchise, and it’s incredible to see how quickly the title went from dark, violent indie comic to Saturday Morning Cartoon juggernaut. Daredevil is my favorite comic book series of all time, so I also always appreciated that Eastman and Laird tied the Turtles’ origin story to Daredevil’s. 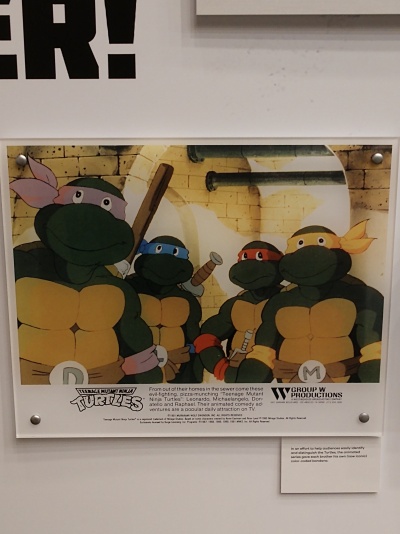 The original animated series was the version of the Turtles I knew and liked best. They were happy go lucky party dudes who protected the city against colorful villains, while eating pizza whenever they could, featuring a lot of toppings that you couldn’t get in Ohio but apparently were available everywhere in New York City. I didn’t move to New York until 2007, so I assume that ice cream and tuna fish must have been pulled from topping lists in the city sometime in the 90s.

My favorite Turtle was always Michelangelo (I had the figure in the photo above). He talked like a surfer and only cared about pizza and having a good time. He was the Turtle I wanted most to be like. In reality, I was Donatello, the smart one. Maybe unconsciously that was what led me away from Ninja Turtles, having to be the goober Turtle.

Beyond the animated series, I enjoyed the first movie a lot. It’s fun to revisit, especially for the Sam Rockwell cameo as “Head Thug” (actual character name) and the clubhouse of any kid’s dreams (maybe without the cartons of cigarettes). Now that I know a lot more about NYC, things like the Turtles’ headquarters being in the abandoned City Hall station are super interesting to me as well. Raphael’s angst is also great.

My wife, Amy, cares way more about the Turtles than I do, especially the first three movies, so she was very excited for the exhibit. Checking it out was worth voluntarily going to Midtown on a weekend. The exhibit is going to be open until July 14, so if you want to check it out, you still can. You can even get your picture taken with some weird new version of the Turtles that I’m not familiar with. 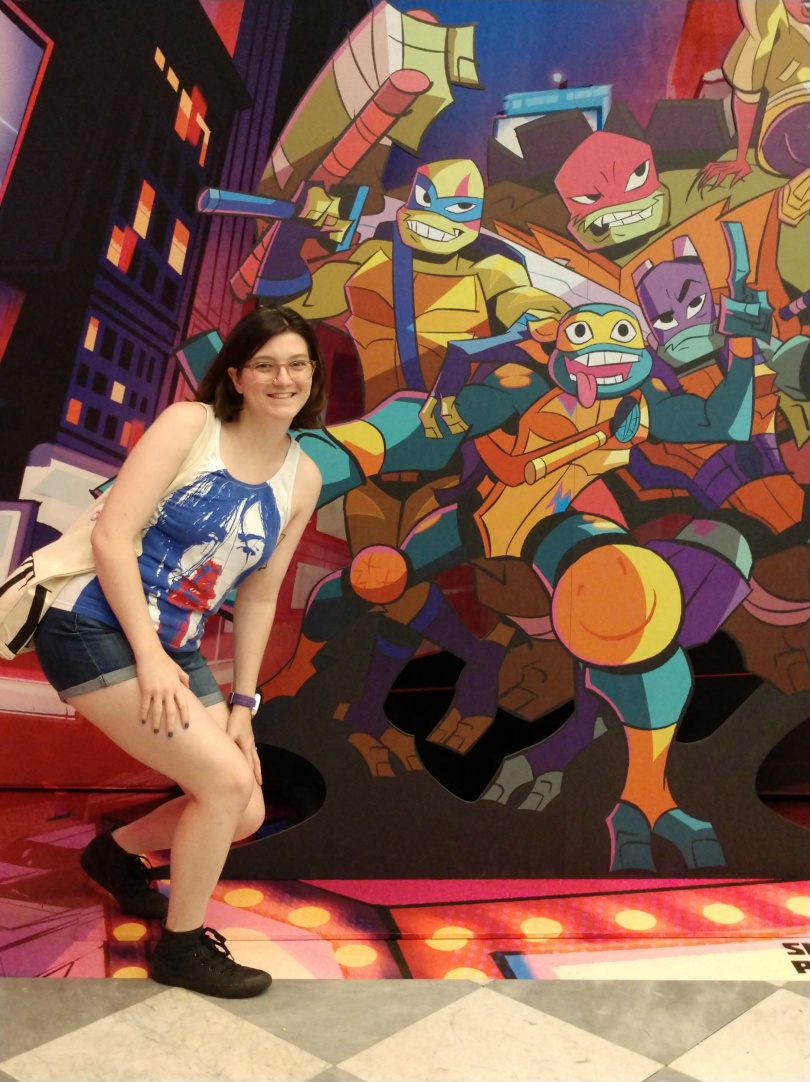 Are you a big Teenage Mutant Ninja Turtles fan? Which Turtle is your favorite? Let us know in the comments or on Twitter.