Think about the things in life that you used to live for, but now you just can’t bring yourself to care about anymore. Perhaps the biggest one for me is March Madness. I grew up completely obsessed with sports. When I was in elementary school I played CYO basketball, rec league soccer, and baseball, loved the Browns, Cavs, Force, and Indians, college football, and college basketball. Between the years 1990 and 2000, the greatest sporting event in my personal universe was the NCAA tournament. There were so many games happening at the same time, and while everybody knew about the powerhouses, like UNLV when I first started watching, Duke, Arkansas, Arizona, North Carolina, and the rest, it was the schools you’d never heard of taking down one of the behemoths that everybody lived for. While I ultimately went to a Division III college in Washington, DC, it was the NCAA tournament that sparked my interest in most of the universities I looked into when I was applying (that Division III school went on to win the national championship in basketball my Junior year, and I could not have cared less).

The NCAA tournament also introduced the casual fan to players that most people had never heard of, who went on to do amazing things over the course of the tourney. Some succeeded in the NBA as well, but many only briefly shone over the course of two weeks, and only the most die-hard basketball fans knew what became of them. Here is a handful of players who made big impressions on me when I was a preteen and teenage basketball junkie. Some names will be instantly familiar, while others might be new to you.

Disclaimer: I used to be a massive Duke fan. I apologize in advance

You may think that you remember Austin Croshere, but there’s a good chance you’re thinking of Christian Laettner, or possibly Cherokee Parks. Maybe Scot Pollard. Dan Dickau. Luke Ridnour. Some other elaborately coiffed Beverly Hills 90210 extra. Austin Croshere was a lot like most of those guys, Laettner especially. As will soon become evident, young John had an affinity for college basketball players who looked like the villain in teen movies. 6’10” with three-point range, Croshere was a mediocre pro, but in his senior year at Providence he was a god. He led the Friars past Duke in the second round and all the way to the Elite 8 before bowing out of the tournament. Then, like all tall white basketball players, he was drafted by the Indiana Pacers and subsequently forgotten.

The other pillar of that Friars team was God Shammgod, holder of the title, “Coolest Name in Sports” 23 years running. Shammgod is mostly known among basketball dorks for three things, 1) the name, obviously, 2) being a NYC playground legend, and 3) an insane crossover dribble. Number 2 didn’t matter to me as a 16-year-old, but 1 and 3 certainly did. God’s coming out party in the tournament that year got him drafted in the 2nd round by the Wizards, where he lasted 20 games before heading overseas. He may have washed out immediately, but his crossover lives on.

This tournament appearance directly led to me considering applying to Providence, until I found out everybody who went had to take a series of courses called “Western Civilization.”

Eric Montross makes this list primarily because of the haircut. It’s the sort of cut that screams, “now that’s a player I can root for!” to old racist men, and also something I wanted very much when I was a 13-year-old basketball player, because I was also tall, white, and goofy looking. I even brought a picture of Montross to the barber the first time I got it done. Montross is best known for being the center on the UNC team that beat Michigan’s Fab 5 in the 1993 title game, following the infamous Chris Webber timeout call. At the time I was very happy to see Michigan lose (which is even more idiotic considering I was a Duke fan at the time), and 26 years later my opinion is the polar opposite. Rose, Webber, and Howard ruled. I see that now, and I atone. Montross was drafted by Boston, who presumably won a Rock, Paper, Scissors tournament with Utah and Indiana for the right to draft him.

“Coast to coast.” If you followed basketball at all in the 1990s, chances are when you hear this phrase you immediately think, “UCLA.” Outside of Laettner v. Kentucky, which I’ll touch on below, there is no more important moment in tournament history. Edney went the length of the floor in under 5 seconds, floating a lay-up in at the buzzer to keep the Bruins alive on their way to an eventual National Championship. And he made it look so easy. Watch that clip again. Edney appears unhurried and calm as he puts his entire team’s season on his shoulders. Tyus went on to a few uneventful years in the NBA, but once you’ve established yourself as a legend, it’s hard to reach that level again. 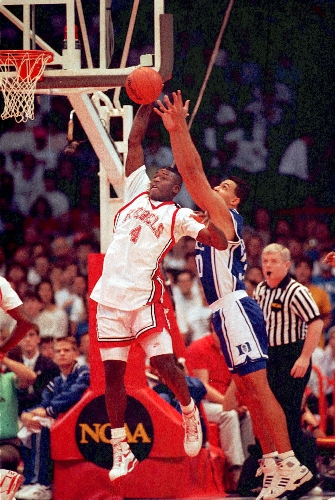 Larry is the only person on this list to this point who I appreciate more for his stellar NBA career than for my exposure to him in college. In fact, at the time I thought that college Johnson was a villain, along with Stacey Augmon, Greg Anthony, towel chewing Jerry Tarkanian, and the rest of the UNLV Runnin’ Rebels. The reason for my pre-teen animosity is that Johnson was the cornerstone of an unbeatable UNLV team that coincided with my first serious interest in the NCAA Tournament, and the final victory was at the expense of my chosen favorite, Duke. Like with the Fab Five, hindsight is 20/20. Eventually I’d stop siding with the snobs over the slobs, but ages 10-15 were preppy nightmare territory. Luckily I shed the stick from the mud by the time Larry became an NBA star, and I was able to enjoy the full Grandmama experience. Larry was built like a linebacker, but his smile and playfulness won kids over big time, and Larry, Alonzo, and Muggsy were one of the all-time likable trios.

Thinking back on Santa Clara’s huge upset of Arizona in the 1993 Tournament, the one thing that a lot of people tend to forget is not that Steve Nash was Santa Clara’s star, but that it wasn’t the end of his college career. Nash was a Freshman at the time, and ostensibly had three more shots to take the Broncos deep into the tourney. Of course, it feels like the pinnacle because it ultimately was, but how great was that pinnacle? It’s the first upset I remember ever seeing, and at the time it was the biggest upset in the history of March Madness. Despite looking like the Shermanator in American Pie, Steve Nash was transcendent from the start, and of course went on to become one of the greatest point guards of all-time. I’ll always have a soft spot for Mark Price, and seeing Stockton and Kidd play was a treat, but in my opinion none of them hold a candle to Nash.

There goes my hero/watch him as he goes...oh, sorry. I got distracted there for a minute.

In case there are any Kentucky fans reading I’ll leave the video for the end and you can close out when you get there. This is the major heel turn portion of the article. I’m not going to say too much about the universally despised Christian Laettner, apart from he was probably the greatest college basketball player of all time, his shooting performance in the 1992 Kentucky tournament game was without a doubt the greatest single game shooting performance in NCAA Tournament history, and everybody but me thought he was a dickhead. And he probably was, but what a glorious dickhead. I even loved that he was on the 1992 Dream Team, because why wouldn’t I? He was the star of my favorite college team.

Laettner was outstanding, but my actual all-time favorite college basketball player will always be Bobby Hurley. He was an integral part of the ’92 Duke championship team, but it was the following year when he was the leader of the team that cemented my love for him. I had a framed copy of the Sports Illustrated from 1993 with Hurley on the cover until I graduated high school. In a lot of ways, Hurley was Laettner’s opposite. He was a sallow gym rat, whereas Christian was the tall, matinee idol face of the team. Hell, look at their names. Christian. It screams captain of the crew team. Bobby is your mom’s boyfriend who works overnights at the Kum and Go.

Laettner went on to a respectable NBA career, and while we’ll never know how good Hurley would have been had he not nearly died in an automobile accident in 1993, I still have my #7 Kings jersey.

Also, yes I tried to apply to Duke, and yes, Duke decided I was not Blue Devil material. The school never even sent me an application, which is why they can go screw since. 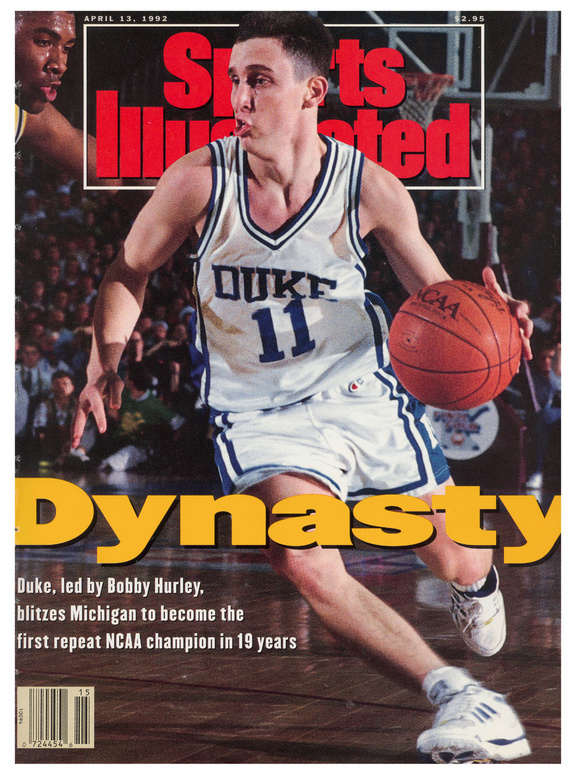 Sorry Kentucky. It’s like Chekhov’s gun. It had to be revealed once mentioned. Besides, you’re responsible for Mitch McConnell. You deserve this.

Who were your tournament favorites? Let us know below or on Twitter.