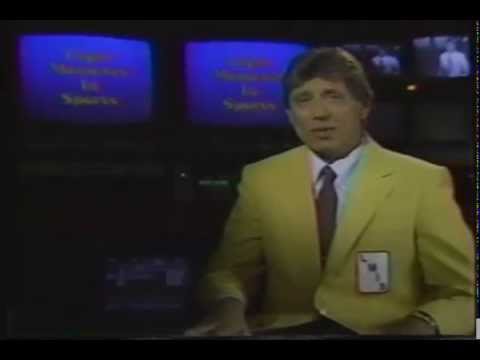 Prior to all of that, we had an antenna and a VCR. As a child in the mid-1980s, my sisters and I didn’t often pester our parents to buy our favorite movies on videocassette. Instead, the movies and shows we accumulated became our favorites, simply because they were there, and that was what happened through sheer repetition. One of the earliest tapes I grew to love, one that I ran until it wouldn’t work anymore, was Light Moments in Sports 1986.

Citing a bloopers/yearbook compilation of the moments in a fairly unremarkable sports year may seem insane, but my response to that would be clearly you don’t understand the significance of sports bloopers, and bloopers in general, to culture as a whole in the 1980s, and in the development of children in particular. Blooper compilations were everywhere. Sports Illustrated used to give away blooper videos along with subscriptions, so when my dad signed up for the magazine in 1987 the tapes started rolling in. This Week in Baseball featured a blooper segment, and Wide World of Sports would also incorporate them. On a non-sports front, America’s Funniest Home Videos became a phenomenon, thereby delaying the revelation to a wider audience that Bob Saget’s comedy was actually dirty as fuck for several more years.

I don’t remember exactly how we ended up with Light Moments in Sports 1986 but if I had to guess it probably came from my Aunt Donna. She and my uncle had cable, including HBO, so she was our source for tapes of Fraggle Rock, Big Trouble in Little China (which I will definitely get around to talking about in the future), and other random movies and shows. I assume she noticed it was on one day and thought I might enjoy it.

If I didn’t at first, I certainly learned to through rote memorization. Thanks to Light Moments in Sports 1986, I, a Midwestern boy with no connection to either team, know the events leading up to the Bill Buckner error and the 1986 Mets World Series win as well or better than anybody who grew up in Boston. I also know where the bad CGI lightning effects should be inserted into the game film, and how to shoehorn it all in so it vaguely fits into the framework of the poem “Casey at the Bat.” I remember that the Columbia University football team had a truly remarkable losing streak. I remember that something called the Eskimo Olympics once existed, and it was deemed wacky enough to include on a sports blooper tape. I remember that post-career opportunities for athletes weren’t quite as robust as they are now, and maybe that’s why Joe Namath hosted the whole thing, but then again, who’s to say that Joe Namath was ever above such things?

I may not be the only person who remembers these things, but considering that the YouTube video of Light Moments in Sports 1986 only has 421 views and I’m probably four or five of them, I’m close to the only one. It’s available below if you’d like to check it out.