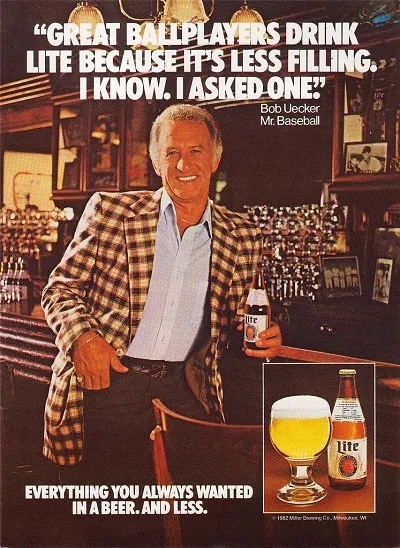 Two of my favorite forms of media to ingest are 80s and 90s commercial compilations on YouTube and the website defector.com. For the unfamiliar, Defector is a media company founded by alumni of Deadspin, a website that I read from its inception to its destruction by Jim “Herb” Spanfeller. My favorite Defector writer is David Roth, and I am a longtime fan of his feature, “Remembering Some Guys.” David and I are of a similar age, and his recollections of 80s and 90s Major Leaguers were also a trip down memory lane for me.

Remembering some guys is not just limited to baseball, however. It’s one of my favorite pop culture activities, and I’ve found that watching tv commercial compilations is a great way to jog your guys memories. With that in mind, I wanted to run through some popular culture figures of my youth that every once in a while I will have the revelation/recollection “wow, that person was still alive when I was a kid.” Here’s a set of those guys (some of which are women or animals).

The king of microwave popcorn was actually the inspiration for this article. Orville and his grandson Gary starred in numerous commercials in the late 1980s and early 1990s for the popcorn that bears his name. By that time Orville had sold the company and worked as a paid spokesman, following a long career where he was an innovator in food science, particularly in the field of popcorn. More importantly, even in his 80s Orville had some of the best hair in the game. He died in 1995, in his hot tub, a location befitting his stature as an octogenarian style icon. I will always love a company whose spokesperson is the actual owner/founder of the company, Papa John’s excluded. Shaq’s cool, though.

Hey, who said the guys we’re remembering had to be human? It makes me very sad that virtually nobody under 35 has memories of Spuds MacKenzie commercials. What a brilliant concept for a commercial: people like beer. People like dogs. Why not put a dog with the beer? 80s beer commercials were a television genre unto themselves, a shared universe inhabited by former professional athletes, bikini babes, an adorable pup, and a sea of mostly interchangeable macro-brew pilsners. I grew up in a golden age of commercials.

Hey, who said the guys had to be real? Of course Max Headroom was real. “The first computer-generated TV personality” was actually Matt Frewer (Rick Moranis’s neighbor in Honey I Shrunk the Kids) wrapped in prosthetics with a digitally altered voice. I knew none of this when I was six years old. All I knew was he was a computer graphic and he looked cool, end of story. He looked so cool he made it into the tattoo of Mt. Rushmore with the heads of the presidents swapped out for 80s pop culture figures that I got as a present to myself on my 40th birthday. The other three 80s luminaries in that piece are The Noid, Mac Tonight, and a crash test dummy. Which brings us to the next guy to remember on this list…

We’re not talking about the 90s alt-rock band here, although they’d be good guys to remember as well. No, this is another commercial entry. I’m just now realizing that all of these have been from commercials with the exception of Max, although he was in commercials as well. I probably should have explicitly called this piece “Remember Some Guys from Commercials” but I digress. The Crash Test Dummies are ideal for this piece for me at least because I truly forgot they existed at all for a good chunk of the 2000s. It wasn’t really until I started this website that Vince and Larry wriggled their way back into my brain. Anyway, this is another example of how pretty much all commercials in the 80s and 90s ruled. Even the educational ones were entertaining !

Let’s remember one more guy. For this one I’m gonna take a swerve.

Yep, Lucille Ball. She may seem like an odd choice to remember, but do you know what year it was when Lucille Ball died? 1989. 1989! Lucille Ball has been dead for 32 years! Put another way, my 36-year-old wife was only 4 when Lucy died. Sure, it’s possible that people my wife’s age or younger may know who Lucy was from Nick-at-Nite, but they likely have no actual memories of Lucille Ball the person when she was still living.

People like Lucille Ball, and Jimmy Stewart, and Bob Hope, and Frank Sinatra are one of the reasons I wanted to write a piece like this because I find it very interesting to think about what elderly celebrities were still around during the early years of a person’s life. For me, it was a lot of people born at the very beginning of the 20th Century. My family had a subscription to Sports Illustrated from 1987 until the mid-1990s and I still remember the 1996 cover “The Kid at 78” a feature on Ted Williams as he turned 78. You can probably do the math yourself, but that means Ted Williams was born in 1918. Somebody turning 78 now was born in 1943. I still remember finding out about people dying who had been born in the 19th Century; now a centenarian was born in the 20s. Yes, obviously I understand how time works, and that those timelines moved forward as I myself have aged. It’s just that I think the frame of reference for things like that for many of us will always be from the perspective of our childhoods, regardless of when that childhood began.

Hey that got maudlin, huh? Well I hope you enjoyed at least some of that post, and check back for more. Or if you’re new here, delve into the archives. The last two years or so have been weird for a lot of us, me included, and to top it off we bought a house six months ago that eats into my creative time a lot, but I’m going to try to update the website more often. I’m not ready to stick to a schedule again, but I’d like to at least put up a few new pieces every month.

If you’re new and you don’t want to comb through the archives, you can always pick up my book 80s Baby: A Story of Childhood Told Through Stuff. It’s available in paperback and you can also buy it on Kindle or read it for free if you have Kindle Unlimited. Feel free to subscribe to alerts for new posts, and follow me on Twitter and Instagram.